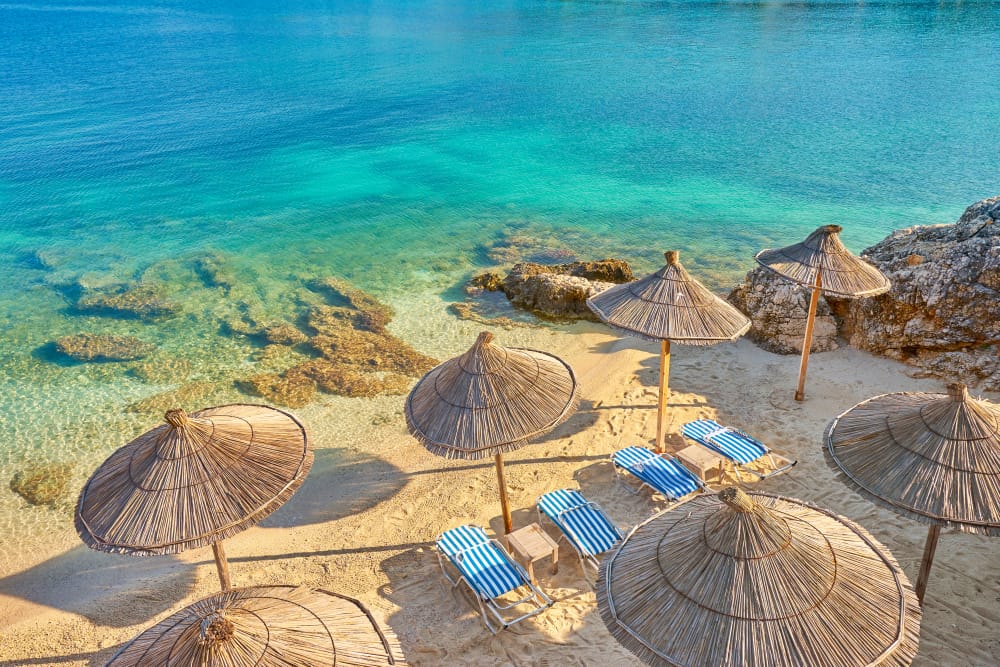 If you’re trying to decide between visiting Albania or Macedonia, we’ve written this post to help you choose. There are a lot of similarities and differences between the two countries, and while we’d love to suggest you visit both, we know that if you have a limited amount of time you may have to choose.

So, if you’re having trouble deciding and it’s come down to Albania vs. Macedonia, we’ve laid out the differences here so you can make the best decision for your limited holiday time.

Note: We are talking about the country of North Macedonia, which recently changed its name at the beginning of 2019 after a name dispute with Greece.

However, as the name North Macedonia is not commonly used by people outside of the region yet, we will use the names Macedonia as well as North Macedonia to get people familiar with what we are talking about. Note that Macedonian is still the correct adjective to describe the food, culture, and people. This is a travel article, not a political one, so any comments regarding this will be ignored.

… you want to visit the seaside

If you’re planning to visit the Balkans in the summer, when the temperatures can soar and heat waves are prevalent, you’ll be grateful when you’re near a beach. And luckily, with 476 kilometers of coastline snaking up and down the beautiful Adriatic and Ionian Sea, you’ll have plenty of choices.

While Macedonia has beautiful Lake Ohrid, which is beautiful in its own right, it’s not quite the same as the Albanian Riviera, which is one of Europe’s most stunning coastlines.

… you want the better local food

While I liked my meals in North Macedonia, I can’t help but give the edge to Albanian food. Albanian cuisine is a wonderful mix of local delicacies as well as heavy Greek and Italian influences — I’ve had amazing Greek gyros and fantastic handmade pasta in Albania as well as fantastic local dishes like tavë kosi, lamb baked in a yogurt sauce.

The seafood you’ll have in Albania all up and down the coast is incredible, and while Lake Ohrid trout is delicious, it doesn’t beat the Mediterranean seafood of the coast.

For me, living in Bulgaria, I find that Macedonian food is quite similar to Bulgarian but with less emphasis on fresh vegetables and salads. It’s quite hard to have a meatless meal in Macedonia, whereas I found Albania a much more vegetarian-friendly country (I’m not a vegetarian but prefer to have a mix of meat-eating days and meat-free days).

While both Macedonia and Albania have Greek and Roman ruins, I’d have to give the edge to Albania for having the more impressive set of them. Macedonia has Stobi in the middle of the country as well as Heraclea Lyncestis near Bitola, so it’s not without its ruins to be sure, but I still have to pick Albania.

I don’t think either of these archaeological sites can hope to compete with Butrint National Park near Sarandë or Apollonia near Durrës. Butrint is one of the best UNESCO sites I’ve ever been to — massive Roman ruins with virtually no crowds. Likewise, Apollonia is one of the most impressive ancient Greek cities still standing, and as it’s on the UNESCO tentative list, I think historians would agree with me.

If you’re a UNESCO collector, Albania has two sites (the pair of cities Berat and Gjirokastra, which frankly are both so distinct they should be listed seperately, as well as Butrint) whereas North Macedonia has one (Lake Ohrid).

Albania had one of the darkest periods of communism in Europe, ruled over by one of the most paranoid dictators of all time. The countryside is marred by the remains of hundreds of thousands of bunkers which are a legacy of Enver Hoxha’s iron fist rule over the country.

Albania has done an excellent job memorializing this difficult period of their past, and have created several museums which explain this topic in depth. I highly recommend Bunkart 1 on the outskirts of Tirana as it used to be Enver Hoxha’s private nuclear bunker. If you don’t have time for that, Bunkart 2 in the city center, as is the House of Leaves, and both are fantastic for learning about Albania’s difficult past.

… you want to see beautiful churches and mosques

As a result of Enver Hoxha’s dictatorship over Albania, for several decades, religion was outright banned in Albania. This led to the destruction of many historic churches and mosques, which was a particular tragedy for a country which had for so many centuries prided itself on the peaceful coexistence of religions.

There are some mosques and churches from the pre-Hoxha period still standing – notably, Et’hem Bey Mosque in Tirana and Lavdar i Oparit Church in Berat – but most churches and mosques in Albania are newer, construction having started in the last 30 years or so.

Meanwhile, Macedonia never experienced the same attack on religion as Albania has, and its religious architecture is some of the most impressive in Europe. Particularly of note for religious tourists is the city of Ohrid, which numbers 365 churches, one for each day of the year. The Church of St. John at Kaneo is an Ohrid icon, and one of the most famous churches in all of the Balkans.

Macedonia also has a significant number of ethnic Albanians who are part of the Muslim faith, and for that reason, there are a lot of beautiful mosques in Macedonia as well. Particularly beautiful is the Tetovo Mosque, with incredible tilework and beautiful paintings, located about halfway between Skopje and Ohrid.

… you want to learn about Yugoslav history and monuments

Macedonia also has a large number of Yugoslav spomeniks, which are abstract sculptures created typically in memorial of a loss or battle. One of the most famous spomeniks of all can be found outside of Kruševo, but you can find more on the Spomenik Database.

… you want to do some wine tourism

While Albania has some great wines, I think I have to give the edge to Macedonia here. Plus, the wine industry in Macedonia is a little more established, meaning that it’s easier to visit some of the wineries here whereas many Albanian wineries are small family-run farms that don’t necessarily have visitor hours.

Tikveš Winery is easily Macedonia’s most famous and it welcomes visitors frequently, though appointments for tours are recommended. Their temjanika is especially delicious, so be sure not to miss that! Stobi Winery in Veles is another fantastic winery that shouldn’t be missed if you’re curious to explore the Balkan wine scene.

… you want to practice your Cyrillic and your Slavic language skills

If you love reading and practicing the Cyrillic alphabet, you’ll be in for a treat in Macedonia! And if you want the occasion to learn, Macedonia is definitely a good place to get your Cyrillic bearings… considering it literally was invented in Ohrid, which was then part of the Bulgarian Empire.

Meanwhile, Macedonian language is extremely similar to Bulgarian (to the point where I can speak my limited Bulgarian to a Macedonian person and they will understand). It’s similar to Serbo-Croatian languages as well, though not quite as closely related. So if you have exposure to other Slavic languages, Macedonian won’t be so hard to grasp.

Meanwhile, Albanian is a language isolate, with confusing pronunciation, lots of ë’s and q’s and other scary-looking letters, that make learning and recognizing Albanian words extremely challenging.

Choose either Albania or Macedonia if…

…. you love a quirky capital city

Tirana and Skopje are both incredibly quirky places that are unique in Europe. Tirana has its strange Piramida, its bunkers, and its dozens of colorful and quirky bars and cafés that make it one of Europe’s most unique capital cities.

Meanwhile, Skopje’s crazy 2014 facelift left the city littered with statues and replicas, a pirate boat chills in the middle of the city’s main river, and funky book kiosks can be found basically everywhere you go.

Personally, I find Tirana more interesting than Skopje, but that comes down to personal taste. If you like grit over charm, you’ll be happy in either.

… you don’t mind a little chaos

Albania and Macedonia are both changing rapidly, and that means that are some bumps in the road.

Expect buses to arrive late or leave inexplicably early, occasional language barriers that can only be overcome with dramatic charades, and perplexing sets of instructions whenever it comes to anything remotely bureaucratic or official.

If you can handle this without losing your cool, you’ll have a fantastic time in either Macedonia or Albania.

From the mountains of the Albanian Alps to the seaside of Sarandë to the lakes of Komani, Albania is blessed with abundant natural beauty. And while it’d be easy to give Albania the edge on nature, Macedonia has an equal number of beautiful places that are just a bit more under the radar.

Macedonia boasts Matka Canyon, with one of the deepest underwater caves in the world, Mavrovo National Park and its impressive mountains, and the UNESCO landscape of Lake Ohrid, so it’s hardly a slouch in the nature department!

… you want a budget-friendly but amazing trip

Whether you choose to travel to Albania or Macedonia (or this article convinces you to visit both!) you should know that you’re in for a treat for your wallet. Neither country is expensive to visit. I’d estimate backpackers can happily skate by on a budget of $30 a day, and couples traveling on a mid-range budget can expect to spend about $100 a day ($50 per person).

When I deeply needed a day of relaxation in Skopje, a night at a 5-star spa hotel only cost me $60 – quite a deal! Value is high in this part of in the world, so bouge it up.

We are in the middle of updating our Albania travel resources, but for now, you can check out this list of places to visit in Albania, our favorite Instagram spots in Tirana, our Albania itinerary suggestions, and our restaurant guide to Tirana.

Finally, Make Sure You Come to the Balkans with Travel Insurance

I’m sure you’re aware that getting travel insurance is a good idea for traveling in the Balkans, or anywhere in the world! Stephanie and I have both been paying customers of World Nomads for the last three years. We love the peace of mind it gives us in case of emergencies, accidents, illnesses, theft, or trip cancellation or disruption.

While both Albania and North Macedonia are perfectly safe to travel around, there’s always a risk inherent in everyday travel, so it’s better to play it safe.

>> Get a travel insurance quote for your trip here. <<