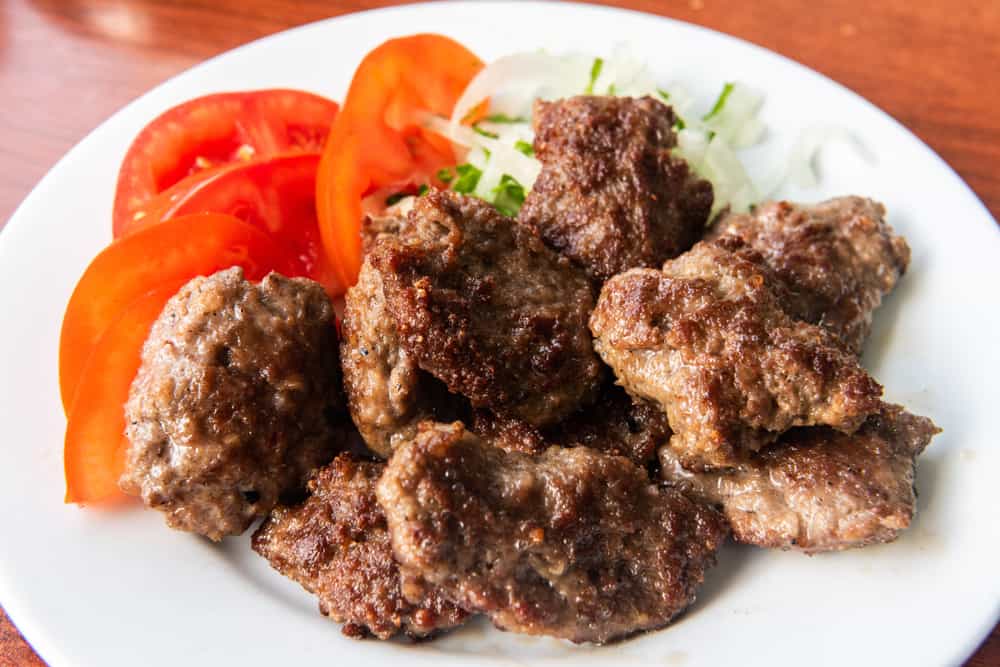 Albanian food is delicious, a mix of culinary influences that is hard to find elsewhere in the world.

It’s been influenced strongly by its Greek neighbors to the south – many of whom make up an ethnic minority in Albania itself. It’s been deeply impacted by the centuries of Ottoman rule in the country and taken many of those culinary traditions and turned them into Albanian dishes.

Albania has also been influenced by many other Balkan cuisines, especially Macedonian and Serbian. Meanwhile, Italian cuisine – seemingly far from Albania, but only 40 kilometers by sea at its narrowest point – has also made a significant impact on Albanian cooking.

But even with all those influences coming together, Albanian food is still rather unique. There are dishes you’ll find in Albania that you’ll be hard-pressed to find elsewhere in Balkans. I find Albanian food to be one of the more fresh-tasting and well-balanced cuisines of the Balkans, many of which focus a little too heavily on barbecued meat (not that Albanians are in any way innocent of this!).

Here are my favorite traditional Albanian dishes that you should look out for while you are in the country!

Bukë means and it’s an essential part of the traditional Albanian meal. Much like we say “breaking bread,” the Albanian language has several phrases related to which highlight its importance in Albanian culture. The phrase for “going to eat a meal” is për të ngrënë bukë – literally, “going to eat bread.” Another popular phrase, bukë, kripë e zemër, translates to “bread, salt, and heart” and is synonymous with hospitality.

You’ll often find bukë appear on the most traditional tables, but nowadays, home-baked wheat are also quite common. Another bread you might find is kulaç, a quick soda bread that is common in Albanian home kitchens but not so prevalent in restaurants.

Another essential of Albanian cuisine, I hardly think you’ve been to Albania unless you’re tried this oily, delicious pastry. Stuffed with any number of fillings, burek is anything from breakfast to hangover cure to snack to a meal eaten on the run.

The most common filling is meat, but you’ll also find cheese, spinach, and occasionally potato (my personal favorite, because carbs on carbs is a way of life). If you are vegetarian, avoid anything that says “me mish” — mish is meat in Albanian. You should be safe with cheese (djathë), spinach (spinaq), and potato (), though most is doused in butter and therefore not suitable for those on a vegan or dairy-free diet.

Pite is considered one of the national dishes of Albania and is probably the most beloved meals of the Albanian diaspora. Pite is quite similar to , which uses essentially the same ingredients, just shaped slightly different.

As far as I can tell, the difference is that burek is stuffed thick and then coiled into a circle or sort of zig-zag, and then served in slices. It’s a little heavier on the filling. Meanwhile, is a bit thinner, with just two layers of phyllo, one on top and one on , and served in a lasagna-like cut.

I’m sure Albanians could talk my ear off about the myriad ways and differ, but in my humble opinion, they’re basically the same. The same fillings as above apply.

Tarhana is a dish that originates from harder times, made of the simplest ingredients to stretch food when fresh produce and meat were sparse basically a blend of (like wheat flour) and yogurt or blended together to make a crumbly cracker, which is then usually turned into a soup.

This mixture is then blended into a soup with water, milk, or chicken or vegetable stock. It is a traditional dish throughout many countries in the Balkan region, especially Turkey and Greece and even extending to Cyprus as well. It’s served a bit differently in each country: the Albanian dish is made of a mix of wheat, yogurt, and butter, and it is served with warm olive oil and fresh Albanian feta.

One of the most common dishes you’ll see on Albanian menus is basically an Albanian antipasti platter.

This particular one I ordered in Tirana came with two kinds of cheese, a sweet rose-flavored jam, spicy peppers stuffed with cottage cheese, olives, and sliced sausage. However, it’s really dealer’s choice!

This seemingly dull-looking Albanian dish has a ton of flavor lurking beneath this surface! Tavë kosi is widely considered to be Albania’s national dish.

So, what exactly is it? Imagine slowly baked, lightly-spiced lamb nestled in a bed of local, creamy yogurt, baked until the lamb is falling apart in the casserole. Rice and eggs bulk up the dish and make it a one-pot meal.

Lamb is traditional and implied in the name of the dish, but occasionally, chicken (mish pule) can be substituted.

Also found in North Macedonia (and a similar version can be found stretching as far east as Bulgaria and Turkey as well), qofte are essentially Albanian meatballs.

One of the most popular Albanian dishes is simply a mixed grill of meat, often presented with a teeny tiny portion of salad.

Typically, you’ll get a bit of chicken breast, some sausage, and some lamb. Beef is generally less common than other kinds of meat in Albania.

Petulla is comfort food at its very finest: fried dough lightly topped with powdered sugar and served with (more) powdered sugar, jams, or even cheese.

They are somewhat similar to Bulgarian mekitsa, but they are intended to be eaten as a dessert rather than a breakfast food, and the shape is generally smaller.

Of course, can we even talk about Albanian cuisine without mentioning the beverage of choice – rakija?

Distilled from fruit – usually plum or grape, but often apricot, pear, quince, or whatever fruit happens to be in abundance – rakija packs a mean punch.

Albania isn’t exactly known for its wine – yet – but we anticipate that’ll change soon! The country is producing some delicious and exciting wines, and the fact that Albania barely exports outside of the country means that you should definitely try as many local wines in Albania as you can while you’re there, as you never know when you’ll have another chance!

One thing I really appreciated about Albanian wine is that they are focusing on local varietals rather than international grapes like cabernet, chardonnay, etc. I tried this delicious Puls i Beratit, a local grape, at Mullixhiu (one of my favorite Tirana restaurants) and it was phenomenal!

Though honestly, every Albanian wine I tried was a knockout this trip – and at $2-3 USD per glass in Tirana, it’s a no-brainer to try as much as you can!

First, start by reading our post on planning a trip to Albania. It covers everything from visas to vaccinations to what to pack, so it’s a great jumping-off point for your travel plans.

If you’re curious about the currency used in Albania and how tipping works, we recommend our Balkan currency guide to learn all about the Albanian lek and tipping culture.

If you’re looking for even more places to add to your Albania itinerary, we have a bunch of ideas for you from us and other bloggers in this collaborative post about the 15 best places to visit in Albania!

We are working on all of our Tirana guides, but for now, we have posts on the best restaurants in Tirana and the best Instagram spots in Tirana.

We add new content almost daily! We recommend you bookmark our homepage, our Albania page, or our general Balkans page to refer to when planning your trip.

I’m sure you’re aware that travel insurance is a great idea for Albania and for travel in general! This is especially true when you’re talking about hiking in remote areas where help is far away, or relaxing on the beach or traveling around cities where you can be a potential target for theft.

Stephanie and I have both been paying customers of World Nomads for the last three years. We love the peace of mind it gives us in case of emergencies, accidents, illnesses, theft, or trip cancellation or disruption.

While Albania is perfectly safe to travel around, there’s always a risk inherent in everyday travel, so it’s better to play it safe.