7 Exciting Things to Do in Skopje, Macedonia’s Quirky Capital 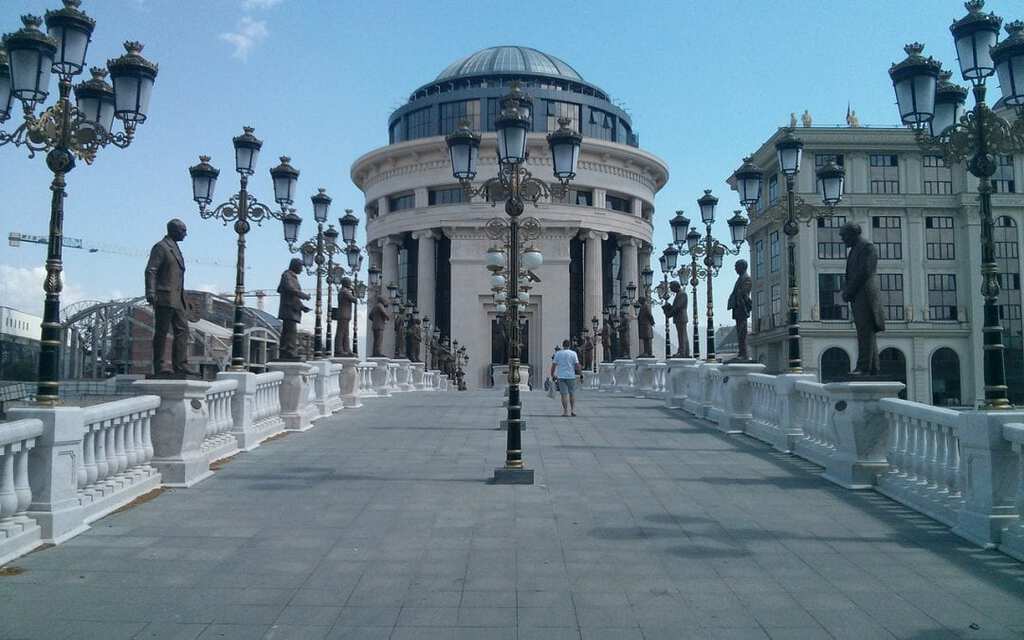 Skopje is often given a quick pass when on a whirlwind trip through the Balkans, with people often telling you to give the capital city a quick pass on your way to Lake Ohrid.

And while certainly Lake Ohrid deserves all the acclaim it receives, I’d also argue that Skopje is worth more than a quick whistle-stop visit to the bus station en route to Ohrid. There are several worthwhile things to do in Skopje when you visit the North Macedonian capital. I spent 10 days there discovering the city’s charms

The Best Things to Do in Skopje, North Macedonia

Visit the “Warrior on a Horse”

Whatever your feelings on the issue are – Greeks feel put out by what they deem as Macedonians ‘stealing’ their history, Macedonians are tired of the constant controversy every time they name something – there’s no doubting that for the tourist, seeing the “Warrior on a Horse” monument is one of the most popular things to do in Skopje, and due to its central location (and massive size) it’s hard to miss.

Walk along the bridge of statues

The most photogenic bridge of all of Skopje, the bridge leading to the Macedonian Museum of Archaeology simply shouldn’t be missed on your trip to Skopje.

While much of Skopje’s renovations as part of the Skopje 2014 project are a bit tacky and distasteful, I think this bridge is the true gem of all the renovation work – a bit of opulence, a bit of restraint.

Yes, it’s a bit obviously new, but as much of Skopje was leveled in the devastating 1963 earthquake which killed thousands, you can’t really fault Skopje for trying to rebuild (even if they may have gone a bit heavy-handed on that front).

Wander the charming streets of the Old Bazaar

The Old Bazaar of Skopje is the second largest bazaar in the Balkans — after Istanbul’s Grand Bazaar, naturally. I really enjoyed walking around the labyrinthine streets of the Old Bazaar, popping into shops along the way and stopping for a cup of tea — served the Turkish way, naturally.

When buying souvenirs, I advise you to avoid the cheap Chinese-made souvenirs and give preference to those peddling traditional Macedonian crafts. A few crafts you can look out for are Macedonian filigree, wood carvings, hand-painted icons of Orthodox saints, and traditional Macedonian textiles. Don’t be afraid to ask questions about what you’re buying to the shopkeepers – they are quite friendly and not nearly as pushy as, say, you’d find in Istanbul’s bazaar.

Marvel at the beautiful Stone Bridge 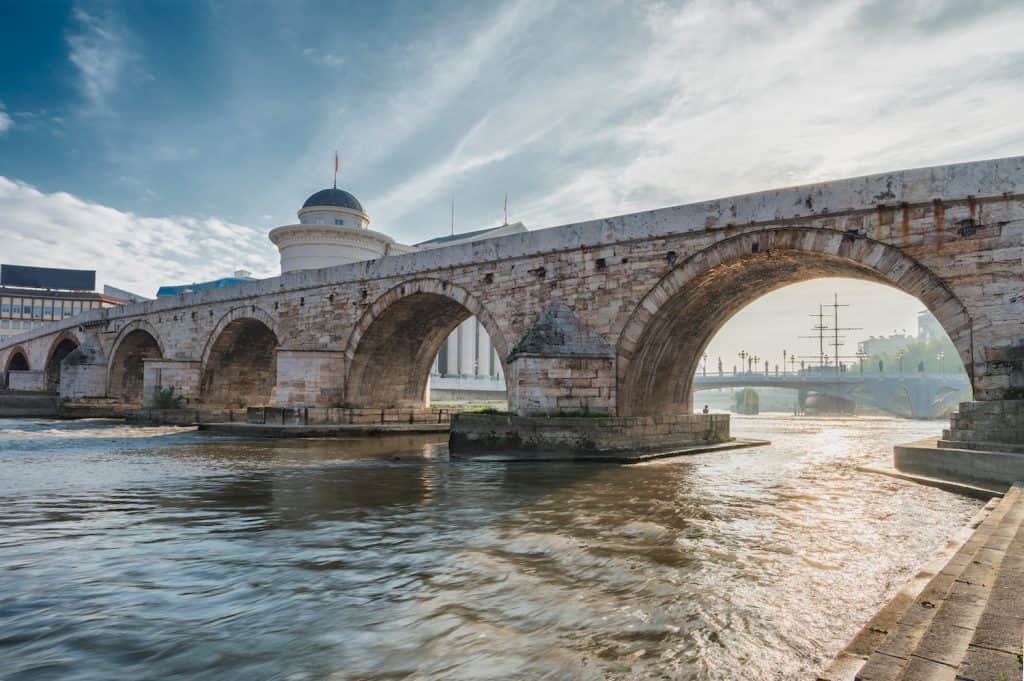 While so much of Skopje is garishly new, the Stone Bridge is one of the most enduring symbols of Skopje’s most restrained past. Skopje has survived earthquakes, fires, occupations, communist repression, and more – yet much of the city has not survived with it.

The Stone Bridge is one of the older pieces of Skopje’s architectural mishmash, built sometime between1451 and 1469. It was damaged several times, most drastically in the great earthquake of 1555, but always repaired promptly.

It suffered its gravest threat in 1944, when Nazi occupiers rigged it with explosives – luckily, at the last minute, the detonation was called off, and the bridge was allowed to stand as proudly as it ever has. A few minor reconstructions have taken place on the bridge in recent years, but generally, it looks as it did over five centuries ago.

While you’ll find food in the Balkans can be quite similar, there are some delicious things to look for in Macedonia that are unique(ish) to the region. One such dish is the sharska burger, which is similar to a Serbian pljeskavica but with a dollop of cream (kaymak) on top. Another traditional Macedonian dish is uvijac, a thinly pounded piece of pork rolled around cheese and wrapped in bacon.

Vegetarians, if you’re worried, don’t be: there are a few vegetarian options on offer at every Macedonian restaurant. Shopska salad will become your best friend (a salad of tomatoes, cucumbers, peppers, and onion with a ton of sirene cheese grated on top) as well as bread and Macedonian dips like ajvar (a pepper and tomato spread) will do the trick when you’re hungry.

The Skopje Fortress (also called Kale) is a great place to get a beautiful view in Skopje. Seeing a sunset from the fortress is one of my top recommendations for things to do in Skopje. The fortress isn’t in great condition (I recommend wearing closed-toed shoes or at least watching where you walk) but the views from there are unbeatable.

Skopje is blessed to have a gorgeous mountain right inside the city! Mount Vodno stands tall over the city at 1,066 meters and is easily noticed by all of Skopje thanks to the giant Millennium Cross on top.

The views from Mount Vodno are gorgeous and well-worth making the hike up the side of the mountain, which takes approximately two hours. Alternately, if you simply want to visit the Cross and get the viewpoint, you can take a bus to halfway up Mount Vodno then take a cable car the rest of the way. Make like the locals and bring a picnic!

Do a day trip to Matka Canyon

A mere 15 kilometers outside the city is one of the most beautiful parts of Macedonia, Matka Canyon. Nearly every Macedonian I’ve spoken to says that to visit Skopje and not see Matka Canyon is basically a crime.

A taxi should cost about 300 denars to Matka Canyon (one-way) or you can take a bus. Once at Matka Canyon, you can rent kayaks or hire a local to take you on his boat out to see some of the beautiful caves of Matka Canyon.

Where to Stay in Skopje

If you’re still undecided as to where to stay in Skopje, here are our top picks for each budget category!

Budget: A brand new boutique hostel with only private rooms, at basically the same price as staying in a dorm? Sign me up! The lovely Clover Hostel right near the center of town is great for solo travelers who want a social environment with a bit of privacy, and it’s inexpensive enough that you can enjoy some peace (and nights without snoring soundtracks) without it breaking the bank. It’s located near the center as well as Skopje’s co-working spaces so if you are planning an extended stay in Skopje and need to work as well, it’s a great choice. Check out prices, availability, and reviews here.

Mid-range: For an affordable option that offers way more privacy than a hostel, I stayed at and highly recommend Boutique Hotel Rose Diplomatique. The rooms were comfortable and spacious (though admittedly furnished a bit oddly – mine for some inexplicable reason had an exercise bike in the bedroom). The breakfast spread was tasty and super generous, and I loved getting to eat in the lovely patio every morning. The staff was really friendly, even when we arrived late in the evening, and generally I just felt really welcome here. It’s a short walk from the center and an even shorter walk to the trendy, leafy hipster neighborhood of Debar Maalo. One note: there is no elevator so if you have trouble with stairs this may not be the right place for you. Check prices, reviews, and availability here.

Luxury: Skopje has a number of 5 star hotels, but our top pick is the Marriott for one main reason: location, location, location! Literally overlooking the famous “Warrior on a Horse” statue, this hotel in the center of town couldn’t be more central. The rooms are spacious and well-designed with flatscreen TVs and stunning TV views, the in-house hotel bar is sleek and trendy, and travelers rave about the delicious breakfast. There’s a luxurious in-house spa with an indoor pool, jacuzzi, sauna, masseuses, and a fitness center – so if you want a bit of TLC while in Skopje, you don’t even have to leave your hotel’s front door. If you want to stay in the most luxe hotel in Skopje – and not pay an arm and a leg for a 5 star hotel – this is certainly it. Check prices, reviews, and availability here.

Make sure you always travel to Macedonia with a valid travel insurance policy. While the country is safe, accidents can happen anywhere. If you experience an accident or theft, travel insurance will help you recover your costs and enjoy the rest of your trip.