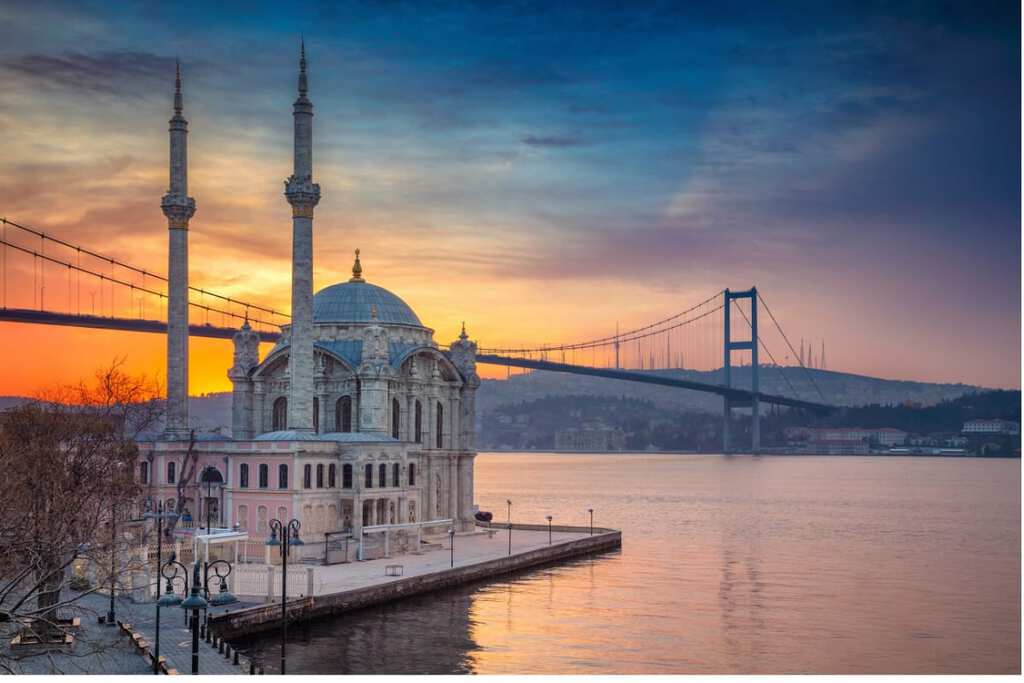 Discovering Istanbul and Beyond

Turkey is partly on the Balkan peninsula, partly part of the Asian continent – and it is this very dichotomy which makes Turkey so unique. While many people don’t think of Turkey as Balkan, we’d beg to differ: nearly all of the most crucial parts of Istanbul are located squarely on the Balkan peninsula, plus basically all of the Balkans were once part of the Ottoman Empire for a time, some longer than others, and therefore there are a lot of cultural similarities that make Turkey, in our estimation, part of the Balkans.

We include Asian (Anatolian) regions such as Cappadocia and the Turkish Riviera in our travel guides because we want to be the most comprehensive resource for travel in Turkey as possible and we know many people won’t be able to resist the cheap domestic flights to some of Turkey’s most beautiful destinations. With Pegasus and Turkish Airlines both offering stunningly cheap tickets around Turkey (seriously, cheaper than buses oftentimes!) the whole country of Turkey is at your fingertips.

While much ado has been made about Turkey and safety, we think it’s all a bit overhyped. We travel to Istanbul frequently and feel as safe there as we do in any other major city. I’ve traveled to Cappadocia, Denizli, Pamukkale, and Bodrum, using overnight buses and planes and traveling solo, and felt perfectly safe. Stay away from the border regions (not much to see there anyway!) and you’ll have no more to worry about than you do visiting Paris, Barcelona, or London.

That said, Istanbul is a truly incredible city, the only true mega-city in the Balkans with at least 15 million people and more in the metropolitan area. As such, Istanbul can be a bit hectic at times – traffic can be a nightmare, and it always feels a bit busy – but it has a life that no other city in the Balkans has. Whenever I am in Istanbul, I feel more alive, more awake to the beauty of the world. It is a truly special place. Turkey is also home to incredible islands, beautiful beaches, jaw-dropping ruins, and incredible natural wonders. From the “cotton palace” of Pamukkale to the ruins of Hieropolis to the beaches of Fethiye, there’s more to Turkey than initially meets the eye. 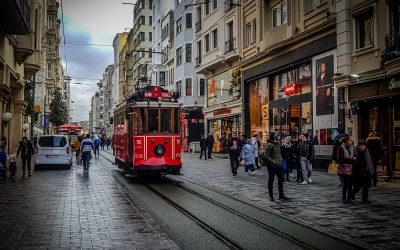 Essential Turkey Packing List: What to Wear & Pack for Turkey

If you're planning a trip to Turkey, you're in luck: prepare yourself for a magical experience unlike nowhere else in the world. Turkey is a place of immense history that spans the centuries, once the heart of one of the most important empires the world has seen.... 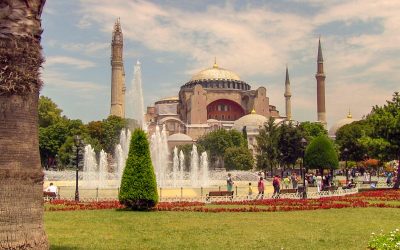 Turkey is one of the most beautiful (and underrated) travel destinations in the world, and its beauty has been immortalized in literature time and again. Whether you're looking for beautiful Turkey Instagram captions or a snippet from Turkish literature, we have you... 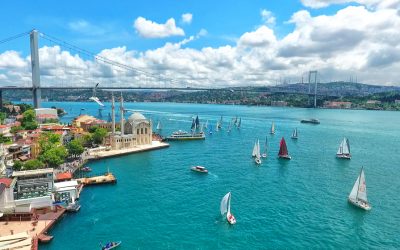 Traveling to Turkey: What to Know & Where to Go

Note: This post on traveling to Turkey is a guest post by Amy of Templeseeker. Minor edits have been made to change the post to American English. See below the post for our recommendations and tips. Turkey is a wonderful country full of culture, natural beauty,... 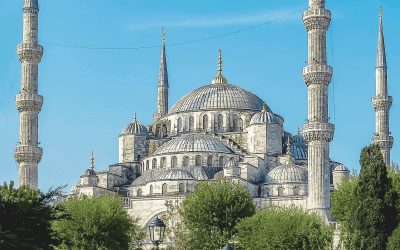 Beyoglu or Sultanahmet: Which Part of Istanbul Should You Stay in?

Istanbul is a massive city that can be overwhelming to a first-time visitor. For one, it's huge, with a population of over 15 million people in the metropolitan area. For another, it's broken into two continents, 39 districts, and hundreds of neighborhoods. So it's... 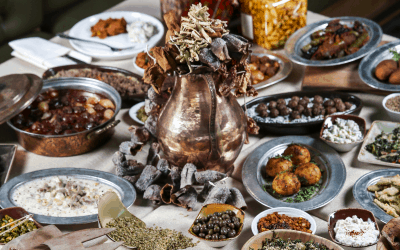 Headed to Turkey and looking for the best Turkish food to eat on your trip? Here are five of the best Turkish dishes you absolutely must try while in Turkey! And for those looking to learn about Turkish cuisine at home, you should be able to find these dishes at... 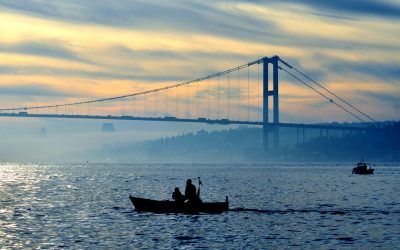 The Bosphorus divides Istanbul into the European and Asian sides of the city and is one of the most beautiful places in Istanbul. There's something incredibly majestic about this peaceful body of water, dividing two continents yet connecting them through a flurry of... 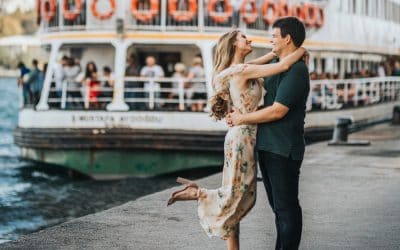 Istanbul is one of the most romantic cities I can think of, and planning a honeymoon in Istanbul is a no-brainer. The city is beautiful, historic, and captivating, the kind of place where unforgettable memories are easily made. The fact that the Turkish lira is in a... 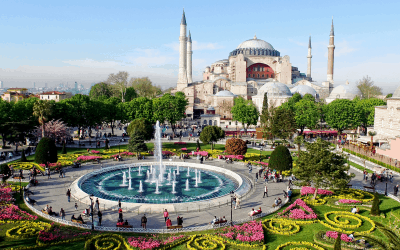 The 10 Best Hotels Near the Blue Mosque: Where to Stay in Sultanahmet

If this will be one of your first trips to Istanbul, you'll likely be wondering where to stay. We have an entire Istanbul neighborhood and hotel guide, but this list can be a bit overwhelming if you don't know anything yet about the city. So here are our picks for the... 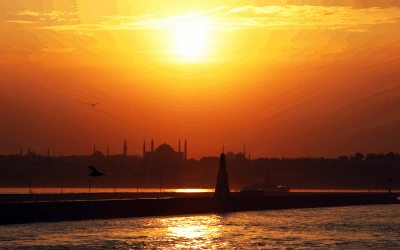 Is Istanbul Safe? 13 Tips to Stay Safe in Istanbul

Whenever I travel to Turkey, my family and friends back home raise their eyebrows. "Okay, but is Istanbul safe?" they always ask me. And yes, for the most part, Istanbul is a safe city for travelers.  But that doesn't mean there aren't things you need to know to... 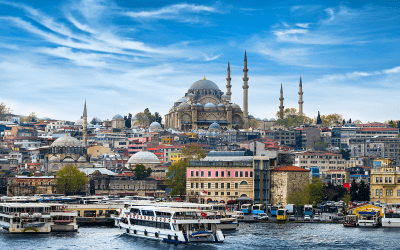 I adore Istanbul. Turkey was the third country I ever visited (after Mexico and Italy), and I keep returning over and over. But it's a complicated city for first-time visitors to grapple with. It's compact yet sprawling. It's inexpensive yet luxurious. Even... 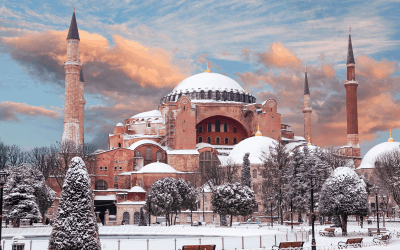 Istanbul Weather in January: What to Expect & Why We Love It!

Can I tell you a secret? Even though I've been to Istanbul five times, I've literally never been there when there was bad weather! That's because visiting Istanbul in January, May, and June, I've gotten to experience the best of Istanbul summer (before it gets too... 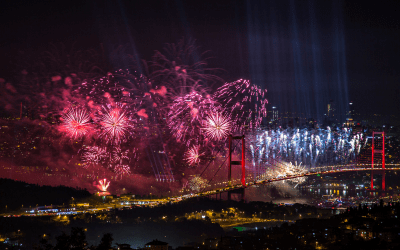 23 Magical Things to Do in Istanbul at Night: An Istanbul Nightlife Guide

No trip to Istanbul is complete without exploring the city's amazing nightlife. While there will be some days when you explore so much of what there is to do in the city that you come home exhausted, there will be other days when you're ready to get out and party... 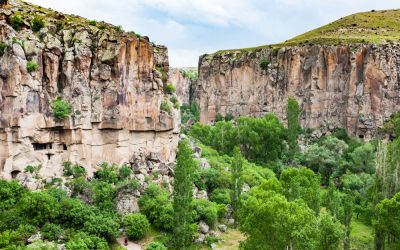 When you think of Cappadocia, you likely think of hot air balloons, Turkish breakfasts atop lavish cave hotels, and fairy chimney landscapes. But that's just one small part of what Cappadocia offers. Cappadocia is not a town or city in Turkey; rather, it's a large... 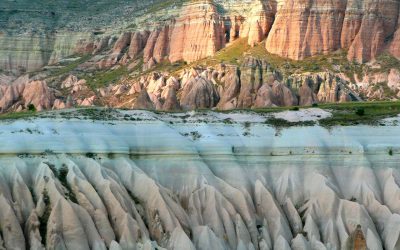 13 Otherworldy Things to Do in Cappadocia, Turkey

Fairy chimneys, sunrise hot air balloons, entire cities built into rock: Cappadocia is like another planet. Visiting here is so unique that I truly can't think of another place in the world that I've visited just like it. There is no shortage of incredible things to... 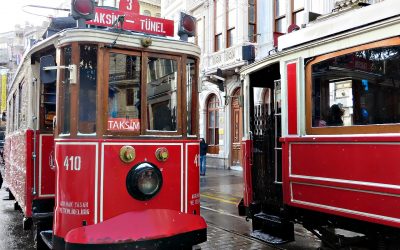 Istanbul or Cappadocia: Which Turkish Destination Is Right For You?

If you're planning a trip to Turkey but you only have time for one place, you're in for a tough decision: Istanbul or Cappadocia? These two destinations in Turkey are each worth a visit of their own, but picking between them is hard as they each offer so much yet are... 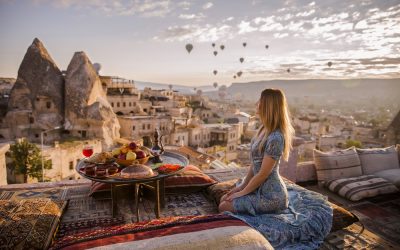 If you're planning a trip to Cappadocia, you're in for a magical experience. Hot air balloons rising at dawn, incredible rock formations that look like they come from another planet, and underground cities that defy logic: Cappadocia is like another world. If you're... 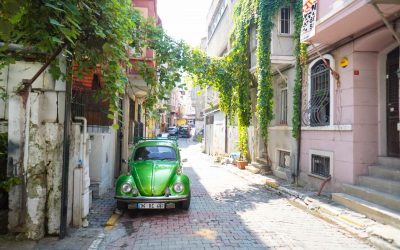 So you have a long weekend in Istanbul planned, and you want to make the most of it? Stephanie and I have been to Istanbul eight times between the two of us, so I think it's safe to say we know a fair bit about how to plan the perfect Istanbul city break. Since we're... 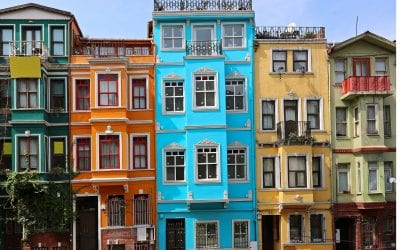 Where to Stay in Istanbul: Neighborhoods & Hotels You’ll Love!

It's impossible for us to truly explain how much we love Istanbul. Between Stephanie and me, we have visited Istanbul eight times and truly gotten to know this incredible city on the Bosphorus. It feels almost as if a second home to us. Every time, coming back to... 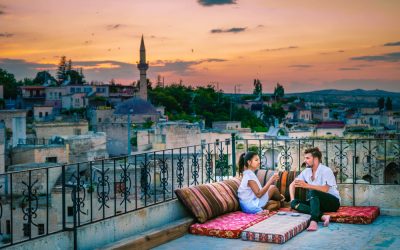 7 Steps to Cancel or Postpone Your Trip to Turkey

Do you need to cancel or postpone your trip to Turkey? Canceling a trip that you've already spent money on can be stressful, but if you travel frequently then it will probably happen at least once or twice! Allison and I have both had to cancel multiple international... 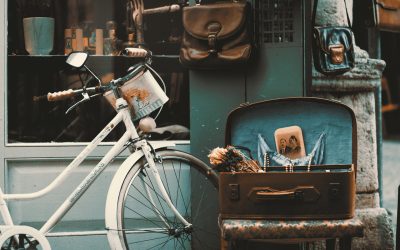 Istanbul is the kind of city that poets and writers love to pen odes to. Whether they write about the city with beauty, sorrow, or hilarity, I always love to come across a tribute to the city tucked away inside novel, poem, or essay. Here are twenty-five of my...