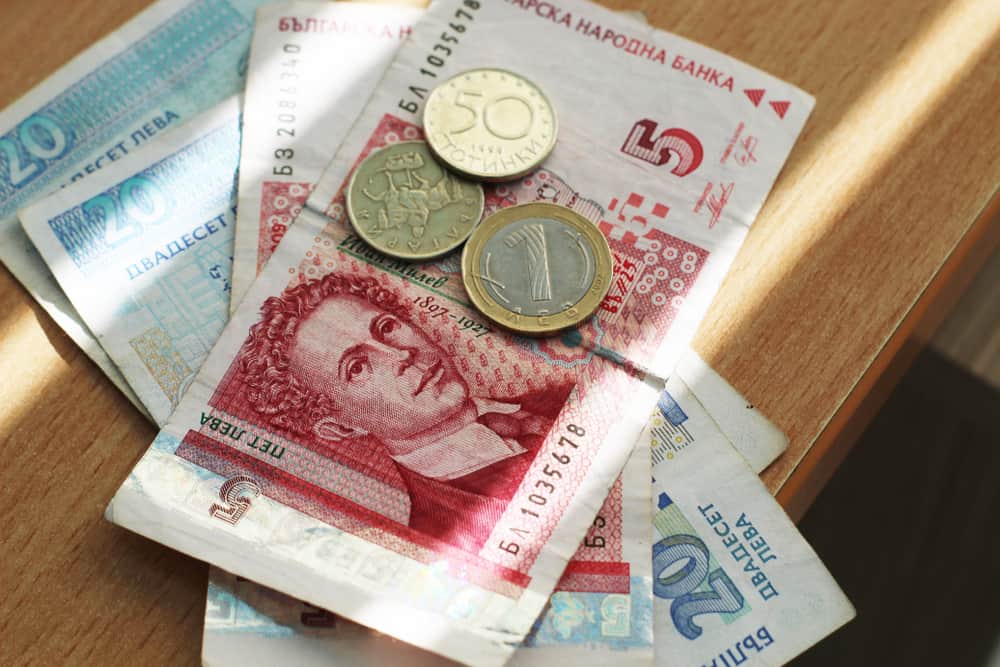 One of the important things a traveler needs to consider when arriving in a new country is the tipping culture of their destination. Regardless of wherever you’re from, remember that you are a guest in their country, and you should adhere to local customs and guidelines.

If it’s your first time in Bulgaria, you may have several questions about how tipping in Bulgaria works, such as how much is expected and when and how you should add a tip.

Stephanie and I have been living in Bulgaria for the last 3 years, and we’re happy to share all we’ve learned about how to tip in Bulgaria so that you (and your servers, taxi drivers, bartenders, and the like!) can have a fantastic time.

Tipping is not compulsory, but it’s more or less expected

When it comes to tipping in Bulgaria, there are a few things to keep in mind. For one, know that often, the base salaries are incredibly low — we have friends who have worked as waiters on a base salary of 20 leva a day, about 10 euros.

A 4 leva tip on a 40 leva bill may not seem like a lot to you, but it may mean your server can afford to take a taxi home when they get off work at one or two in the morning or to afford better groceries.

If you have the privilege to travel, you can afford to tip as well and should factor that into your budget. You should budget to add about 10% tip for fair to good service and more if your service was excellent.

Keep in mind that service standards differ from country to country. What is standard service in the U.S. or Canada would be over-the-top basically anywhere in Europe. Service in Bulgaria is typically a little terser and to-the-point than in other countries, and that doesn’t mean that your server is doing a bad job – it’s just part of the culture.

If you truly have bad service, it’s better to speak with the management about what could be improved about your meal, or to leave a smaller tip of around 5-7%, rather than to just straight up not tip.

Continuing on a similar vein from the above point, when it comes to tipping in Bulgaria, please be mindful of the country’s customs with respect to tipping and don’t let your country’s tipping culture influence how you tip in Bulgaria.

I’ve met my fair share of Australian and British tourists while I travel who hate the concept of tipping culture and feel like they shouldn’t have to tip because it’s not expected for them back home. While I have my problems with tipping culture, skimping out on your waiter is not the way to solve those problems — especially when it’s clear that you have a good deal of privilege relative to your wait staff.

Likewise, I’ve met a lot of expats living in Bulgaria who get frustrated with the fact that servers in Bulgaria tend to be more matter-of-fact and less overtly friendly than servers in their home country. As an American, I try to remember that my expectations for service are greatly different than people from other countries, and I try to adjust my expectations accordingly.

When you travel, it’s best to be aware of what the local expectations are and to adjust yourself to that, rather than expect people to adjust themselves to you.

The etiquette for tipping in Bulgaria depends largely on the kind of service you’re receiving. We’ll go over the kinds of service workers you’ll most likely encounter during your trip and what a good tipping baseline is for each of them.

See also
How to Get from Sofia to Borovets: A Step-by-Step Guide
Powered by Inline Related Posts

Waiter: 10% of the bill for fair to good service or 15% for fantastic service is the norm.

Taxi Driver: Round up to the nearest leva for a bill under 10 leva; perhaps add on another lev if the bill is above 10 such as if you are coming from the airport. For example, if my final bill coming from the airport was 12.50 leva, I would tip 14 or possibly 15, depending on the quality of driving and service.

Barista/Café Worker: Not required if you use counter service, but tipping small change if they have a tip jar and you pay in cash is appreciated. At sit-down coffee shops where you receive table service, round up to the nearest lev or add about 10%, whatever seems more appropriate.

Nail or Hair Salon Worker; Masseuse: Approximately 10% for good service. For example, I tip my manicurist 3 leva on a 27 leva service.

Hotel Housekeeping: It’s polite, but not required to leave a tip of around 2 leva per night for a budget hotel that provides daily housekeeping. You should leave this with a note so that the housekeeping staff knows it’s a gratuity and not an accident. For a more luxurious hotel, around 5 leva per night is more appropriate. You can tip daily or in a lump sum at the end of your trip.

It’s extremely rare to have a service charge added, but do check before paying regardless

In our combined 5 years of living in Bulgaria, neither Stephanie or I could think of a time when we received a bill in Bulgaria with the service charge already added.

However, there is a chance that some places may add a service charge to your bill, so do quickly scan your bill to see. Be sure you’re not confusing the VAT/tax with the service charge! If you’re confused (as most bills are in Cyrillic), simply ask your waiter to clarify your bill.

It’s not always possible to tip on a credit card, so have some cash on hand

Depending on the point of sale device, it is not always possible to add a tip with a credit card. Even when it is, cash tips are generally appreciated as it is more likely to go directly to your wait staff rather than the restaurant management.

While in the U.S., for example, you often have the ability to add a tip at the very end of a meal after your credit card has already been run, in Europe that’s not the case and you usually have to tell your waiter exactly how much to charge on a card if you are tipping by card. For that reason, I think it’s generally less awkward to simply tip with cash.

Bulgaria uses the leva (singular: lev) for all payments, and Euros are not accepted basically anywhere except in extremely dire circumstances.

You should tip in leva as well – you don’t want to give your server the errand of also going to convert that currency in order to get their tip. Make sure you either exchange your money or take out some local currency from an ATM so you can tip in the right currency!

Tour guides often get forgotten about when it comes to tips, but they shouldn’t be — they have to go through licensing procedures which are time-consuming and expensive, not to mention how much time they spend preparing to be ready to guide people each day.

I suggest a tip of approximately 10% of the cost of the tour for your tip for your guide, keeping in mind that if you have both a driver and a guide, they will likely share the tip.

If you take a free tour – such as the excellent Free Sofia Tour – we recommend tipping a minimum of 5 leva and better yet, around 10 leva per person.

We want you to have the best trip to Bulgaria possible! If this will be your first time in Bulgaria, check out our Bulgaria trip planning guide as well as our packing list for Bulgaria.

To help you, we’ve created a number of resources that will be helpful. If you’re visiting Sofia, this 101 things to do in Sofia should be a nice start! Also read our Sofia travel tips post and where to stay in Sofia.

For transportation, check out our guide to avoiding taxi scams in the city. If you’ll be flying into Sofia, you can read our tips for flying in and out of Sofia Airport.

We also have Sofia restaurant and bar recommendations. We also have articles for popular day trips from Sofia like Plovdiv, the Rila Lakes, and Buzludzha.

For more resources for your trip, check out our pages on traveling in Bulgaria and the Balkans.

We strongly suggest that you travel to Bulgaria with a valid travel insurance policy. While the country is safe, accidents can happen anywhere. If you experience an accident or theft, travel insurance will help you recover your costs and enjoy the rest of your trip.