Is It Worth Visiting Meteora? Here’s 5 Reasons Why I Say Yes! 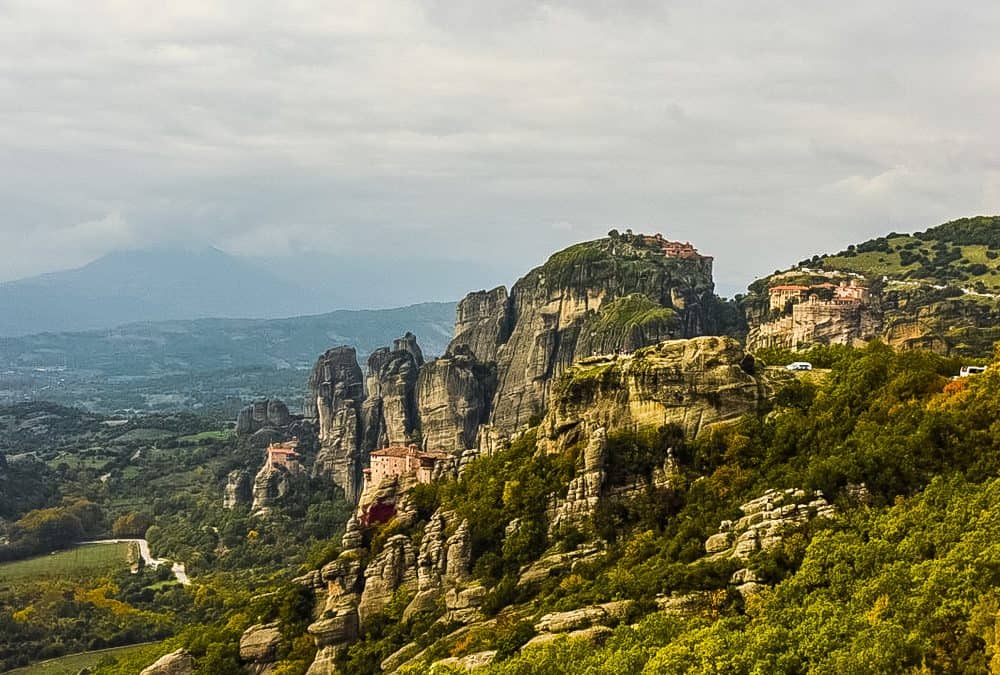 Due to its tucked away position in the very center of Greece’s mainland, Meteora is a bit out of the way, especially when you compare it to other sites closer to Athens that are more obvious stops for a day trip, like Cape Sounion or even Delphi.

But I’d argue that Meteora is definitely worth a visit, for an overnight or two if possible, but it’s equally worthwhile as a day trip for the time-strapped visitor.

If you’re not sure if Meteora is worth visiting, here are 5 reasons we think the answer to “is it worth visiting Meteora” is (almost always) yes!

Is it Worth Visiting Meteora?

Meteora is worth visiting any time of year, but it shines in the off season

I went to Meteora in January and it was exquisite. There had just been a snowstorm all over Thessaly and Macedonia, and as a result, the landscape was dusted in a glittery white snow that made the monasteries even more beautiful.

Add this to the fact that there were almost no other tourists – maybe one or two other small minivans full of day trippers – made Meteora all the more magical.

Meanwhile, Stephanie went to Meteora in October, and she found it not to be too crowded and well worth it as well.

However, we have both heard from various tour guides in Greece that Meteora can be a bit of a nightmare in summer.

Tour buses park everywhere, making getting in and out of monasteries difficult; if you’ve rented a car, parking is all but impossible. Lots of people climbing the steep monastery steps (what, did you think there was an elevator? Well, there is, but it’s really just a rope-and-pulley system across a ravine, and definitely not for tourists…)

If you truly want to visit Meteora and your Greece trip is during high-season (June to August), you should go anyway, but you should be aware that it’ll be quite crowded and it may dull the magic a bit. If you’re wondering if Meteora is worth visiting in the off-season…. well, I’ll let my winter in Meteora photo essay do the talking.

See also
When Is the Best Time to Visit Greece?
Powered by Inline Related Posts

It’s really easy to get there on a day trip

While Meteora looks to be out of the way, in reality, it’s an easy day trip from two of the most popular mainland Greece cities: Thessaloniki and Athens.

I visited Meteora on a day trip from Thessaloniki; Stephanie visited on a day trip from Athens. Both were easily doable on a guided tour (a rental car would also work, but try the Greek train system on a day trip at your own sanity’s peril…) I’ll link to both the tours we did at the end of this post, so you can book for yourself if I’ve convinced you that Meteora is worth visiting!

While certainly, we could have enjoyed a bit more time around Meteora, enjoying the scenery and visiting more monasteries, we both found that one day was plenty when it came to taking in the sights, not getting monastery fatigue, and still getting a good overall impression of Meteora.

… But the surrounding area makes it easy to stay longer

That said, while Stephanie and I both visited Meteora on a day trip from different cities in Greece, there are plenty of people who plan to stay in the area around Meteora for a few days and explore the area.

From hiking to paragliding to rock climbing, the area around Meteora is phenomenal for people who want to stay a couple of days and truly experience this one-of-a-kind landscape for all its magic and wonder (and get to see several sunrises and sunsets too — a major plus for photographers, and something that we didn’t get to experience as day-trippers).

Other activities near Meteora include rafting, Jeep excursions, canyoning, and more, so if you’re looking for an active side to your Greece trip, it’s a fantastic place to stop.

You may have an odd sense of deja vu when arriving in Meteora — it’s been used as a film backdrop in several movies, from Game of Thrones (where it was digitally rendered to be the Eyrie) to the James Bond movie For Your Eyes Only.

When arriving in Meteora, I was shocked at just how beautiful it was. I’d dare say the landscape outshines the monasteries.

See also
Where to Stay in Athens: Hotels & Accomodations ​We Love!
Powered by Inline Related Posts

Here, rock formations erupt from the ground, almost like the karst limestone islets in Thailand… but emerging from the earth, which made it even more otherworldly.

The formation of these pillars is fascinating from a geological perspective, so I highly suggest visiting Meteora with a guide who can elaborate on how this landscape formed over many millions of years; I can’t hope to describe it properly with my lack of scientific vocabulary, but it’s a fascinating history.

And the monasteries (and their history) are truly spectacular

But of course, the real reason why you’re visiting Meteora is not just to see its otherworldly landscape but its monasteries for which the landscape has become synonymous!

The history of these monasteries dates back to 1344, when a monk from Mount Athos brought his followers to Meteora, where he later founded Meteoron Monastery about a decade later. They built it on a rock where they could control access to the monastery, by drawing up the long ladder whenever political issues reared their head.

And that would happen sooner rather than later: Turkish forces continually raided northern Greece, and the Byzantine Empire began to form the cracks in its foundation that would eventually be its undoing, when the Ottomans later took over all of Greece.

However, due to their inaccessibility and their ingenuity, the monks of Meteora were allowed to continue their religious practice and maintain their monasteries, despite Ottoman attempts at converting its subjects to Islam. Still, during this time, some of the original monasteries fell into disrepair or disuse.

Six of the 20 original monasteries have survived the erosion of centuries of wind and rain, but also human chaos: from the Ottoman invasions to the World War II bombings, these monasteries stand proudly, just as beautifully as the day they were erected, if not more beautiful for their age.

You can get to Meteora easily from either Thessaloniki or Athens. It takes about 3 hours in each direction from either city. Contrary to what you’d expect, taking a group shuttle tour is actually more economical than taking public transportation, as trains in Greece can be a little pricy.

In Thessaloniki, I took this exact guided tour to Meteora. You can read my full write-up here.

Stephanie took a guided tour when she visited from Athens a few years ago, which is similar in terms of time and what it offers, but it departs from Athens. This is the tour she recommends for seeing Meteora from Athens.

Here are a few things to know before coming to Greece. First, you can read our article on planning a trip to Greece to make sure you’ve thought about each of the travel planning steps on our eleven-point checklist.

Second, if you’re planning to explore the islands as part of your trip here, we have recommendations in our Greek island hopping guide and our Greek destinations guide.

Basing yourself in Athens? You’ll want to read our tips for safety in Athens, our recommendations for where to stay in Athens (or our related post on Athens hotels with Acropolis views!), our guide to visiting the Acropolis, and our favorite Instagram spots in Athens.

Finally, make sure you always travel to Greece or anywhere in Europe with a valid travel insurance policy. Greece is a very safe place to travel, but accidents and theft can easily ruin your trip if you don’t have the travel insurance coverage to recover the losses.

For travel insurance, I use World Nomads. I’ve been a happy customer of theirs for almost three years, and I’m happy to refer them to anyone I meet.