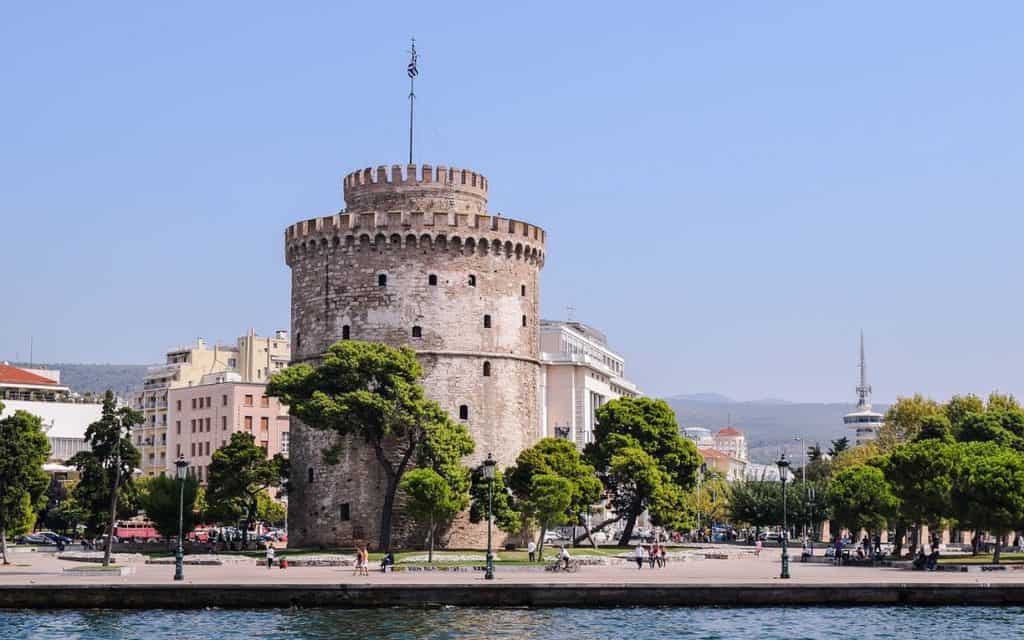 As someone who works completely online and regularly leaves Bulgaria due to my less-than-desirable visa situation, I’ve explored many of the cafe scenes in the Balkans.

One thing I will warn you about cafes in Thessaloniki is that many of them ignore the no smoking law (despite what the sticker may say on the door!). If you are not a smoker, or if you are sensitive to cigarette smoke, you may have some issues trying to work in Thessaloniki cafes.

I’ve noted the cafes where smoke was less of an issue; however, it may have just been on that day that there were not a lot of smokers present, etc., so it’s subject to change.

I also visited one cafe in Thessaloniki that was truly the most heinous customer service interaction I’ve ever had, bordering on abusive and aggressive behavior – so check at the end so I can also tell you where not to go in Thessaloniki for coffee.

It’s a bit funny that one of my top recommendations for where to drink coffee in Thessaloniki is actually a flagship sustainable shoe store… but what can I say? TOM’S is truly one of the best cafes in Thessaloniki.

In a large covered courtyard that’s perfectly warm even in the winter, there are several benches with plenty of workspace as well as tables or two or four scattered throughout. They do permit smoking, but the courtyard is extremely large with a high ceiling so I found that the smoke bothered me very little.

The coffee is a bit more pricy than other places in Thessaloniki – I think I paid about 4 euros for a flat white – but TOM’S works with local organizations throughout the developing world to increase access to clean water. Therefore, with each cup you buy, they provide 2 liters of clean drinking water those in need.

The one thing I didn’t like about TOM’S is that they served my coffee in a paper cup even though I was planning to stay and drink in – for a company that claims sustainability as one of its models, this is a bit of a hypocritical move.

This is a café slash small plates restaurant in central Thessaloniki and it quickly became one of my favorite places to work in the city. I never had issues with cigarette smoke here and I worked here several times.

The music was always the right level and vibe and the food was simply delicious – so delicious, in fact, that it was my first stop when it came time to show my boyfriend my favorite places in Thessaloniki when he came to visit.

The staff is incredibly friendly and the space is small but really cute, with a beautiful interior and a cozy wood-burning stove in the winter that really warms up the place both aesthetically and literally!

This is probably the best specialty/third wave coffee shop in Thessaloniki and the staff is incredibly friendly – they even brought some delicious coffee cake for free to enjoy with my flat white, which was made perfectly.

It’s located in the lovely Ladidika neighborhood which is one of my favorite places to walk around in Thessaloniki. The music was good and not too loud, and the cafe was quite large with plenty of space to spread out.

However, I did find the cigarette smoke to be quite an issue for me, and that plus the fact that it was quite far from my Airbnb in Ano Poli meant that I only visited the one time.

It also turns into a speakeasy at night – which I didn’t get a chance to visit, but I’m sure would be great fun.

I haven’t gotten a chance to actually visit this Thessaloniki cafe because it’s always so popular and I’m a late riser… like really late, as in I show up to the cafe past two o’clock and it’s been totally packed on the two occasions I’ve tried to visit.

However, I’m putting it on my list anyway as it’s a definite non-smoking cafe and it comes highly recommended by many as making some of the best coffee with some of the best vibes in town, and when I went I saw a few people on their laptops and others enjoying chats with their friends, so it does seem like both a good place for working remotely as well as sitting down for a cup of coffee with friends.

For a relaxed café with a gorgeous interior and really work-friendly jazz music, I found it to be a great place to work. Nice and quiet, without too much fuss, the cappuccino was well-made and the prices were fair.

I cannot express enough how much I hope you avoid this cafe in Thessaloniki. The staff was so incredibly rude (and the place reeked of smoke, and I’m not even that smoke-intolerant) that I felt compelled to write my first-ever Google review of the place, which goes as follows:

I entered and said hello to the staff and asked to use the bathroom before I ordered. I was traveling alone and didn’t want to leave my stuff behind while I was in the restroom – I do this all the time and have never had a problem. The man working blocked my entrance and told me “no” without any explanation. I further explained that I was going to order a coffee, I just wanted to use the bathroom before I sat down. I tried to explain and make him see that I wanted to order something and stay there but he literally stood by the door holding the door open, motioning for me to leave. He then got angry at me, raising his voice to me and telling me, literally, these words: “this café is different, this place is not for you.” From that, I’m guessing he was angry with me because I’m a tourist and I don’t speak Greek. I understand 100% a place wanting you to place an order before you use their bathroom but he didn’t even give me an opportunity to order and actually kicked me out of the café, embarrassing me in front of all the other guest there. I’ve traveled to 60 countries in my life and work in the travel industry, and I have never been kicked out of an establishment before even having a chance to order. The man who was working the day of writing this (January 7th) is a complete embarrassment to hospitality and deserves to lose his job or his business if this is how he believes it’s acceptable to treat customers. An absolute joke. His rudeness ruined my entire day and nearly left me in tears.

I live in the Balkans and have been traveling here for the past nearly three years. I’ve definitely been on the receiving end of some less-than-stellar service, and it never upsets me.

See also
The Ultimate Naxos Itinerary: How to Spend the Perfect 2 Days in Naxos
Powered by Inline Related Posts

However, being treated as less than human, actually being told that a place is “not for me” and having the door held open while berating me in front of other guests asking me to leave, is completely unacceptable. This is not just bad service, but harassment.

And in case you think the guy was just having a bad day, other travelers have reported strikingly similar mistreatment (which seems to be directed especially at women). Read this review below.

Note that this review was an entire 9 months before my visit so clearly the staff is aware of it and doesn’t give a crap. There are so many other cozy, cool cafes in Thessaloniki with lovely people running them who deserve your business: don’t give this asshole your tourist dollars, as he clearly detests tourists.

Finally, make sure you always travel to Greece with a valid travel insurance policy. While Thessaloniki is a very safe place to travel, you want to make sure you have your possessions covered if they’re stolen and your medical bills covered if you get sick or injured.