9 Wonderful Things to Do in Bucharest in Winter 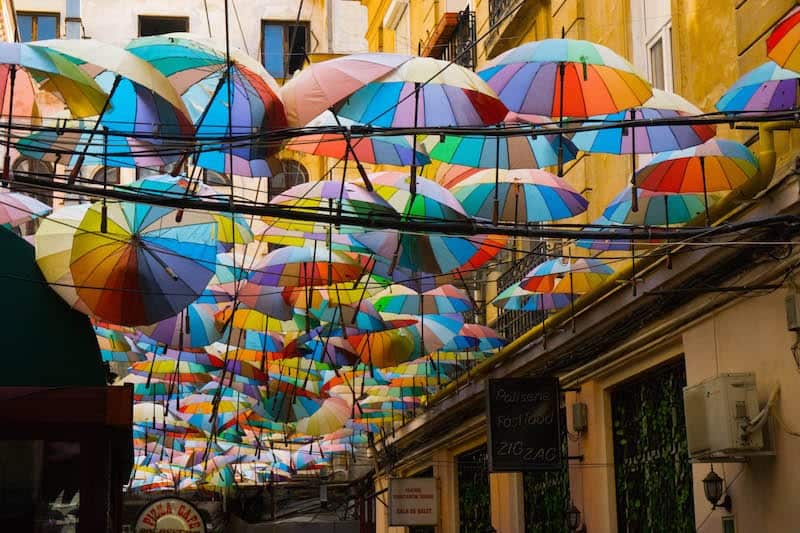 Bucharest is quickly becoming a popular tourist destination, but the crowds hit the city mostly in the summer as one stop on a multi-country Balkan trip or perhaps as a quick Balkan city break. But visit Bucharest in winter and you’ll find a quieter, more local side to the city, cold on the outside but buzzing with life on the inside.

Bucharest is a city that hides its best spots. Whether its a café tucked away inside a Parisian-style arcade or a hidden beer garden with ivy crawling the walls, there’s more to Bucharest than meets the eye, especially during the cold Romanian winter.

Forget about the Bucharest winter with a day at Therme

If you think of a city with a dynamic spa and bath culture, your mind probably instantly goes to Budapest. But did you know that Bucharest is actually home to the largest spa in all of Europe?

That would be Therme, the sprawling spa and wellness center not far from Bucharest’s International Airport, Otopeni. Just a short ride from Bucharest city center on one of the free shuttles (or a quick and inexpensive Uber ride, my personal favorite way to get around Bucharest), you’ll be in the heart of relaxation, forgetting about the cold temperatures outside.

With several relaxation pools, a salt library where you can read surrounded by healing salt crystals, six dry saunas, and four wet saunas, you can easily spend an entire Bucharest winter day in Therme and forget all about the snow piling up outside.

Bucharest is famous for its picturesque bookstores, particularly the Insta-famous Carturesti Carusel in the Old Town of Bucharest. With six spectacular floors of books and knickknacks, bookworms can surely pass a few hours perusing the stands.

My personal favorite branch of Carturesti is actually the Verona branch, close to Piata Romana. I prefer this one as the store was converted from an old home, so you can walk along creaky stairs through room after room of perfectly musty-smelling books (you know the smell).

Once you’ve picked the perfect book, head downstairs to the café, where you can sip on a perfectly-pulled espresso shot from a La Marzocco machine and enjoy your newest purchase.

Check out the Bucharest Christmas Markets

The Bucharest Christmas markets take place daily from December 1st through 30th, so if you are in Bucharest in December, definitely swing by Constitution Square in front of the Palace of the Parliament (the heaviest building in the world!) in order to check out its offerings and enjoy a steaming hot mug of mulled wine.

The Bucharest Christmas Market has over 100 stalls dedicated to Romanian handicrafts, Christmas ornaments, and traditional Christmas market foods with a Romanian twist.

Warm up with some hearty Romanian food

There’s no denying that Romanian food is rich, the kind of food that truly sticks to your ribs. While in the summer, your mouth probably won’t be watering at the sound of polenta and meat stews, these foods can start to sound good in the cold Bucharest winter.

The heartiest and most typical Romanian food is the national dish, sarmale: cabbage rolls stuffed with rice and meat and braised in tomato sauce, typically served with polenta and sour cream.

A few other Romanian foods you may want to try in Bucharest in winter include mici, little skinless meat sausages similar to the pan-Balkan kebabche/cevapi. If you’re brave, try jumari – pork rinds served with raw onion (just don’t try to kiss anyone after!) or ciorba de burta, tripe soup!

Enjoy the solitude of Bucharest’s winter in its parks

Is there anything more crisp and refreshing than enjoying a park freshly covered in snow?

Bucharest is filled with parks and is a surprisingly green city. We didn’t have any snow in Bucharest in winter when we visited. But often, from December on, Bucharest’s parks are decidedly a lot more white than green, covered in beautiful snow!

Sure, it’ll be cold, but I can’t think of a more relaxing way to spend a crisp Bucharest winter afternoon than walking through the snow-covered Cismigiu Gardens or the park that is home to the Tomb of the Unknown Soldier.

Warm up in a cozy coffee or tea house

One of my favorite things about Bucharest is the abundance of adorable coffee and tea houses that are perfect for all seasons, with both lovely terraces and cozy indoors perfectly suited for a winter day.

A few of my favorite coffee and tea places are as follows.

Origo: For delicious third wave coffee made from single origin beans, you can’t miss this hipster coffee shop in the heart of downtown Bucharest

Artichoke: On the buzzing Calea Victoriei, this plant-filled oasis has greenhouse vibes that’ll make you forget the snow drifting outside as you enjoy some specialty coffee in a trendy setting.

Serendipity Tea House: Full of hygge, this cozy tea house has a garden area which shuts down in winter, but you’ll find plenty of lovely nooks and crannies indoors to nestle away in during the winter.

Sure, Bucharest in winter is great, but I think you’d be a fool if you didn’t make it out into snowy Transylvania for a castle-filled day trip. What better way to spend winter in Romania than by exploring its cozy castles amidst a crisp layer of snow?

Romania is packed with fairytale castles and you can easily squeeze in two of its best on an easy day trip from Bucharest. Those two castles are Peles Castle, which is arguably the most photogenic castle in the country, as well as Bran Castle, its most infamous due to its notoriety as being the historical home of the real-life Dracula, aka Vlad the Impaler.

While it’s nearly impossible to do both in a day using public transportation, especially with winter travel delays, doing a day tour to Peles and Bran couldn’t be simpler – book your tickets here.

Warm up from the inside out with some tuica

Tuica, roughly pronounced “tsweeka,” is basically unavoidable in Romania. This Balkan liquor is similar to Hungarian palinka or Serbian (slash Bulgarian slash Macedonia slash Albanian slash….) rakija. Basically, tuica is homemade moonshine that is given to establish dominance over its guests — err, I mean welcome them.

Whether you’re hitting the surprisingly thumping Bucharest nightlife scene or visiting a traditional Romanian restaurant, it’s hard to escape tuica – so why not lean into it? Order some up if you’re feeling brave and give it a shot (literally!)

Bucharest has one of the best nightlife scenes in Europe, perhaps second only to Belgrade in the Balkans. If you’re looking to fill up your winter nights, check out a Bucharest pub crawl.

I recommend doing this on your first or second night in the city, as the pub crawl will take you to 4 of the hottest venues in the city, with one free shot at each venue. Then, you can then pick your favorites from the list and return to during the course of your Bucharest trip (or check out new ones!)

I’m not much of a partier, but the little I did see of Bucharest’s club scene was pretty epic, so I’d definitely recommend this for party-loving travelers.

Where to Stay in Bucharest in Winter

Mid-range: Omega House is a gorgeous boutique hotel (which also has a few dormitory style rooms if you are a solo traveler with a slightly higher budget). The hotel has design and a spacious co-working space where you can make use Bucharest’s speedy, best-in-Europe WiFi. It is near Piata Romana, my favorite part of Bucharest (and where many of the best coffee shops, bars, and restaurants are located). With a 9.0 rating on Booking.com (read reviews, see photos, and check availability here), I’d recommend this for travelers who want a step above a standard hostel without paying a ton!

Luxury: I stayed at the Grand Hotel Continental during my first Bucharest trip and I can’t recommend it enough if you have the money to spare. The room was elegantly furnished and the bed was ridiculously comfortable – the comforters and sheets were just so lush. The bathroom and room itself were crazy large and spacious (though the bathroom was oddly modern, to the point where the sink was really confusing and barely usable). I loved being a 10-minute walk away from the Old Town. I actually don’t recommend at all staying in the Old Town itself, because it’s super loud with drunks at all hours of the night. It comes highly recommended by me and others agree, considering it has a 9.0 rating on Booking.com from others (check reviews and availability here).

Finally, make sure you always travel to Romania with a valid travel insurance policy. While Bucharest is a very safe place to travel these days, you want to make sure you have your possessions covered if they’re stolen and your medical bills covered if you get sick or injured. This is especially true if you plan on doing any winter activities or going out and enjoying the city’s nightlife.