How to Visit the Alyosha Monument on Plovdiv’s Bunardzhik Hill 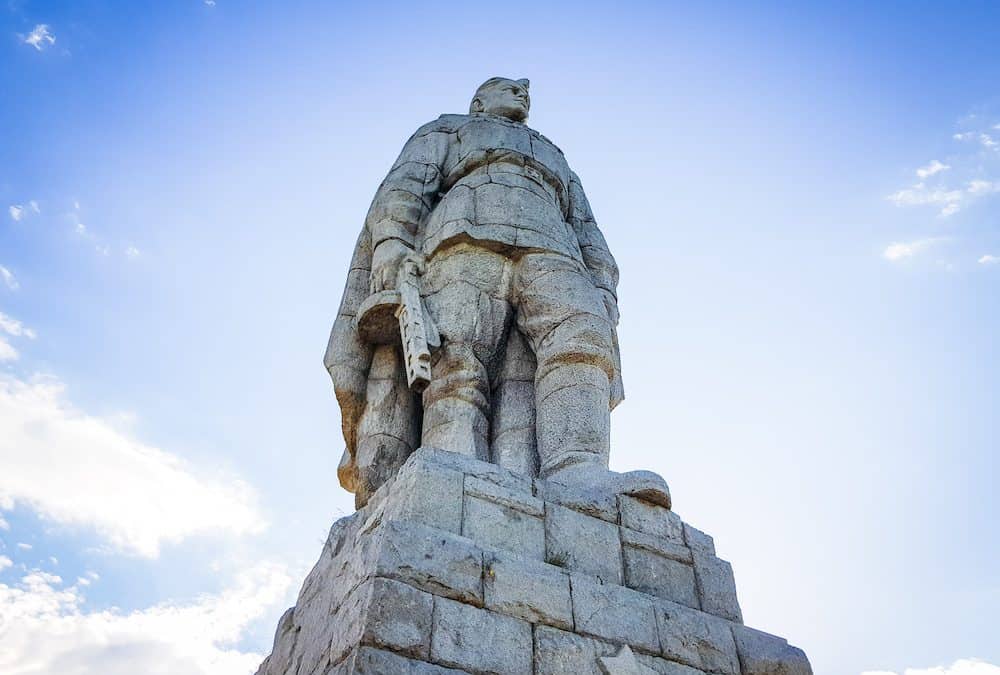 When in Plovdiv, expect to climb hills! The city is famously set around seven hills, and there are different things to see from the top of each one. However, the site you’re most likely to notice at the top of one of Plovdiv’s hills is the Alyosha Monument, a gigantic statue of a Soviet soldier that’s been watching the city since the 1950s.

Here’s everything you need to know to walk up Bunardzhik Hill (Liberator’s Hill) to see the Alyosha Monument up close!

What is the Alyosha Monument If the site of a Soviet soldier seeming to watch Plovdiv strikes you as odd or creepy, you need to understand the complicated history of Bulgaria and the Soviet Union / Russia. The two countries have been tied for centuries since both are a (majority) Slavic peoples who share the Orthodox faith, the Cyrillic alphabet, and a (historic) tug-of-war for regional power with the Turks / Turkey.

During the nineteenth century, Russia found against the Ottoman Empire in Bulgaria, helping to liberate the Bulgarians from the Turkish occupation. This is why it’s common in Bulgaria to find monuments to Russian soldiers, the Russian tsar, and even Russian Orthodox churches like Shipka and the Russian church in Sofia. 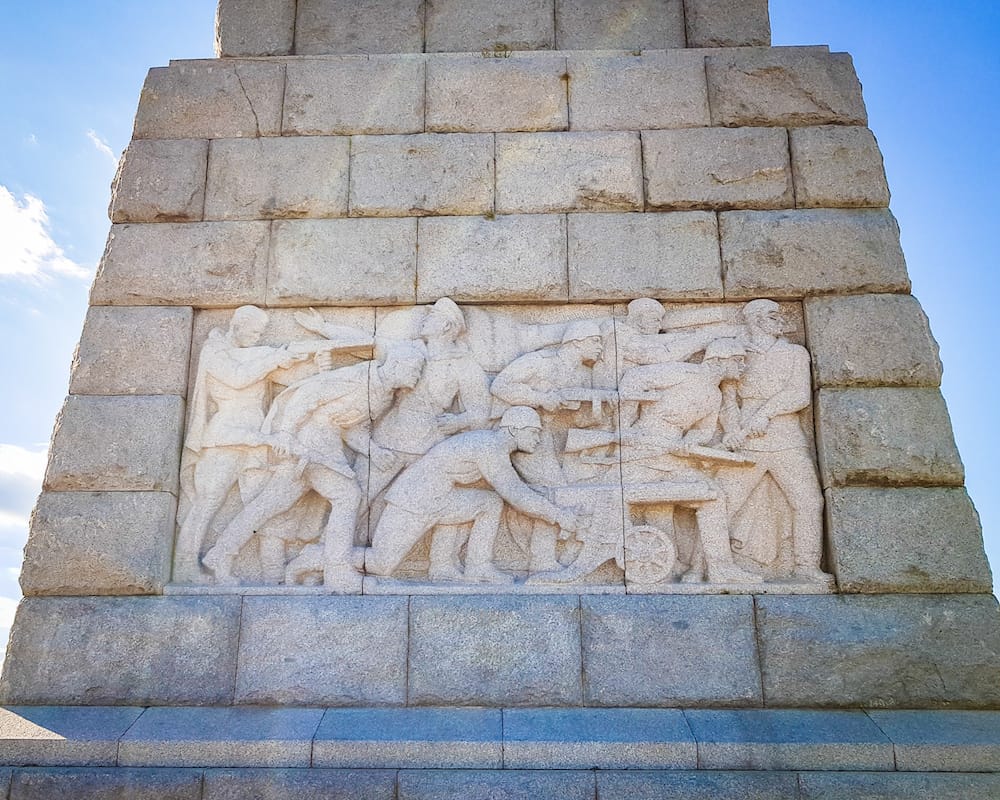 However, this friendly remembrance of Russia’s shared heritage and the time they came to rescue Bulgaria is one thing. Alyosha is a different thing entirely. This is a Soviet statue that was built to commemorate the Soviet Soldiers who died when they occupied Bulgaria during World War II. Yikes.

There have been two city efforts to remove the statue, which has been here since the 1950s. However, both movements were defeated because the statue has become such a significant landmark in the city. Just keep in mind that the relationship between Bulgaria and Russia is complicated, and the site of a statue of a Soviet Soldier is complicated.

Finally, remember that Bulgaria was a communist country from 1946 until the fall of Communism, but it was never part of the Soviet Empire. 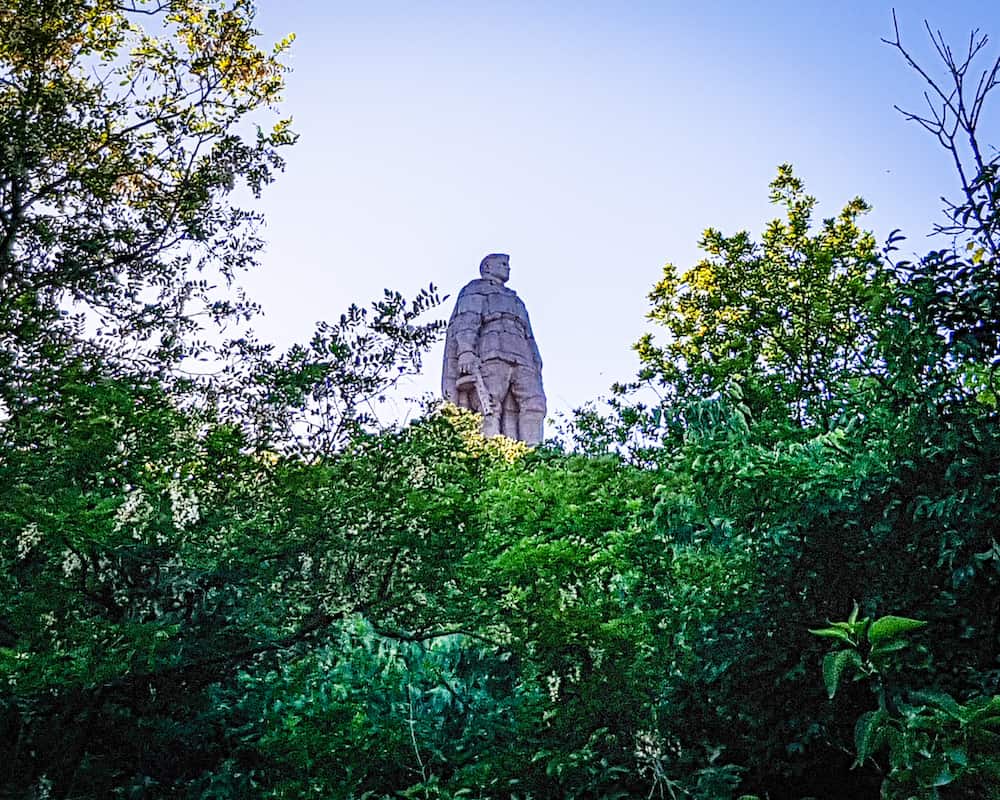 But why is the statue nicknamed Alyosha? Because the model who the statue was fashioned after was a Soviet Soldier from Ukraine named Alexei. Alyosha is a common nickname for Alexei. The actual name for the statue is the Monument to the Unknown Soviet Soldier.

How to Get to the Alyosha Monument 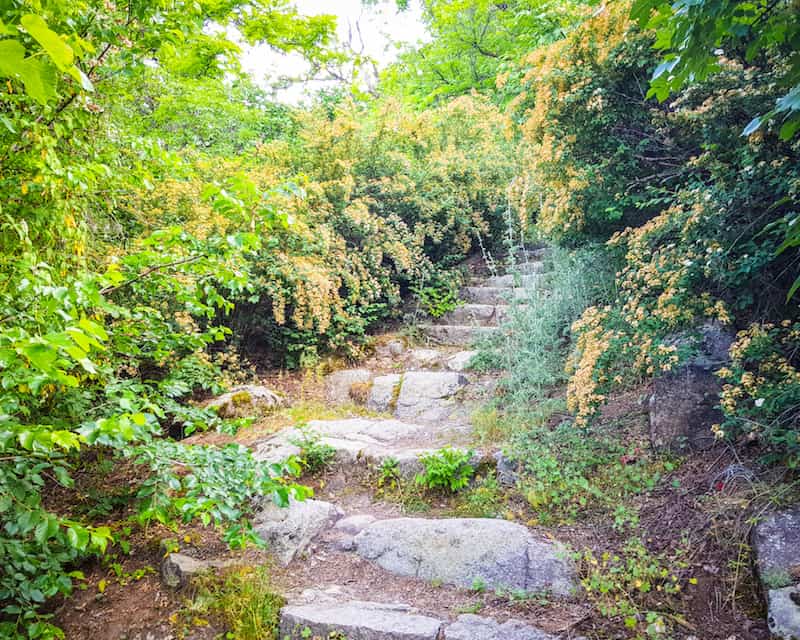 We asked our taxi driver to take us to Alyosha, and he dropped us at the entrance to the hill paths on Ulitsa Volga. The sidewalk is marked, but we were pretty happy that we had Bulgarian sim cards and could bust out Google maps for the walk up.

You can’t really “get lost” per se, because the paths only really lead one direction. However, you can constantly feel like you are lost, which makes the walk up less enjoyable.  The hill is about two hundred and thirty meters high, with one main pathway that curves around to the top. 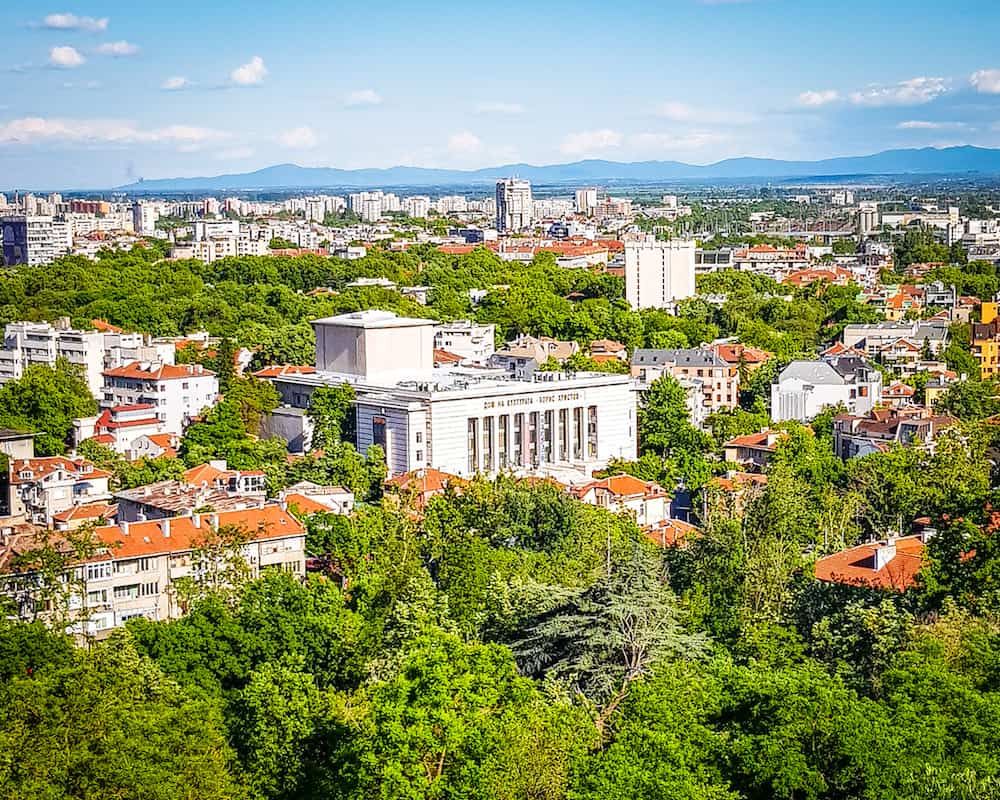 The walk up the hill isn’t particularly steep, but there are spots where you take staircases that feel more like secret passages than public pathways.

The walk up is gorgeous, so make sure you give yourself extra time to enjoy the views on the way to the top! 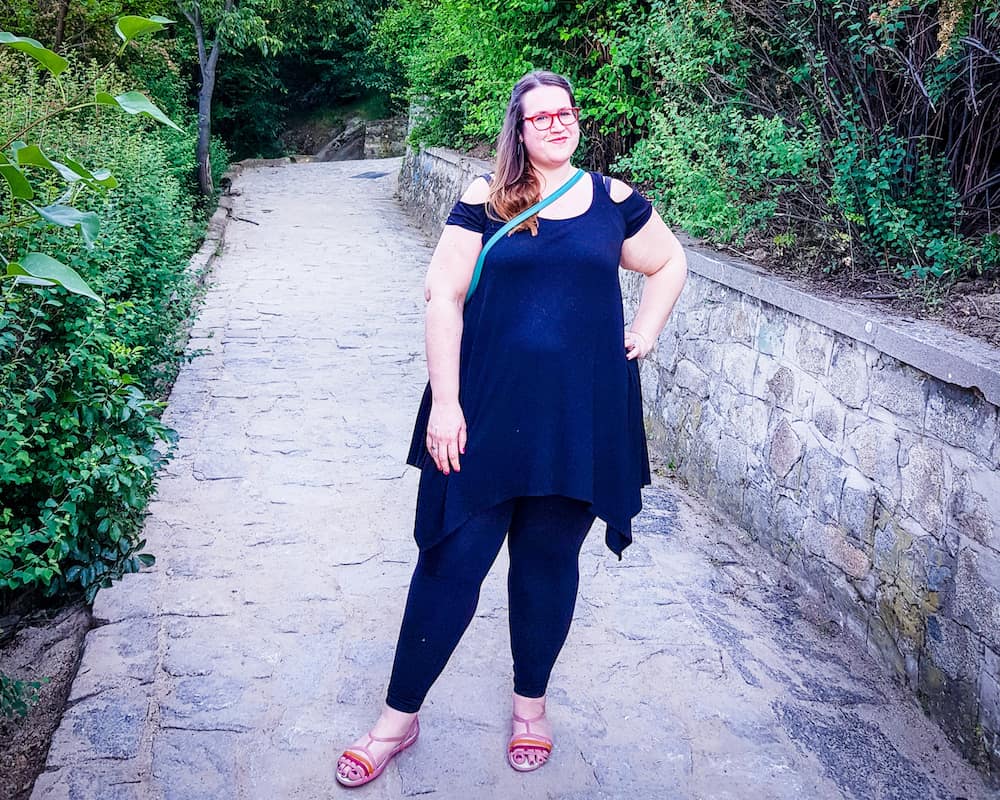 Wear comfortable shoes, since there are spots where the ground isn’t pretty rocky! One thing that I wish we’d had was water because there isn’t any for sale at the top. 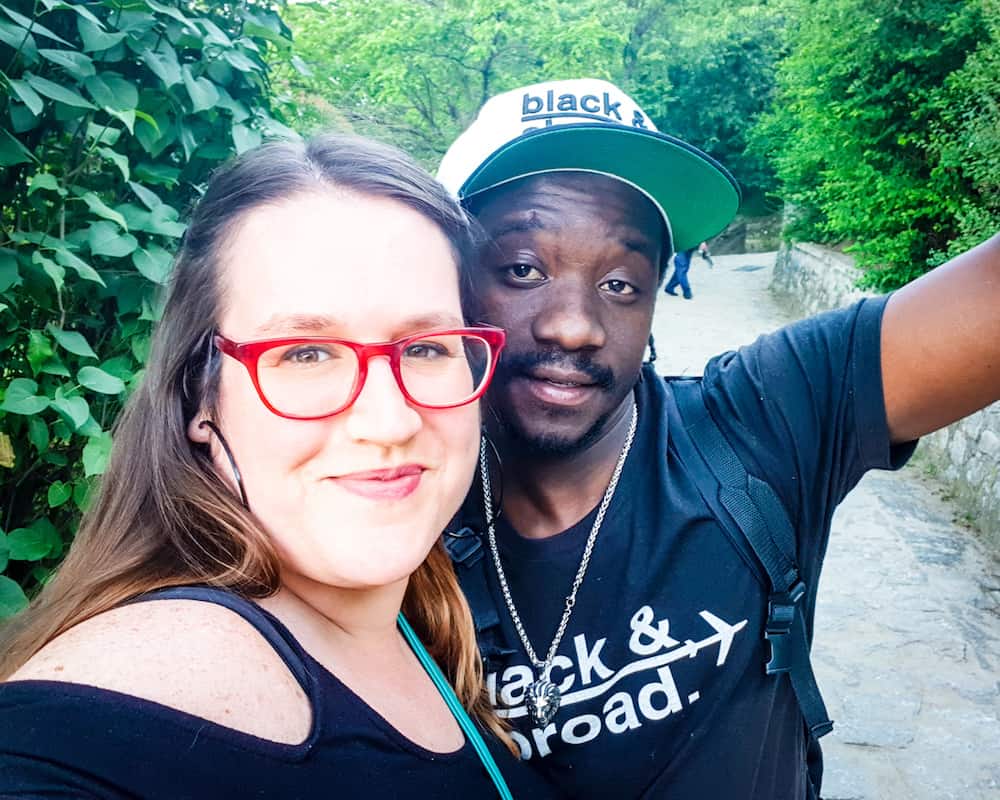 Overall, the walk to the top was lovely! We stopped to take lots of pictures on the way, and it wasn’t ever too steep (even though you are walking up to the top of a large hill).

Other Things to Do on Bunardzhik Hill (Liberators Hill) 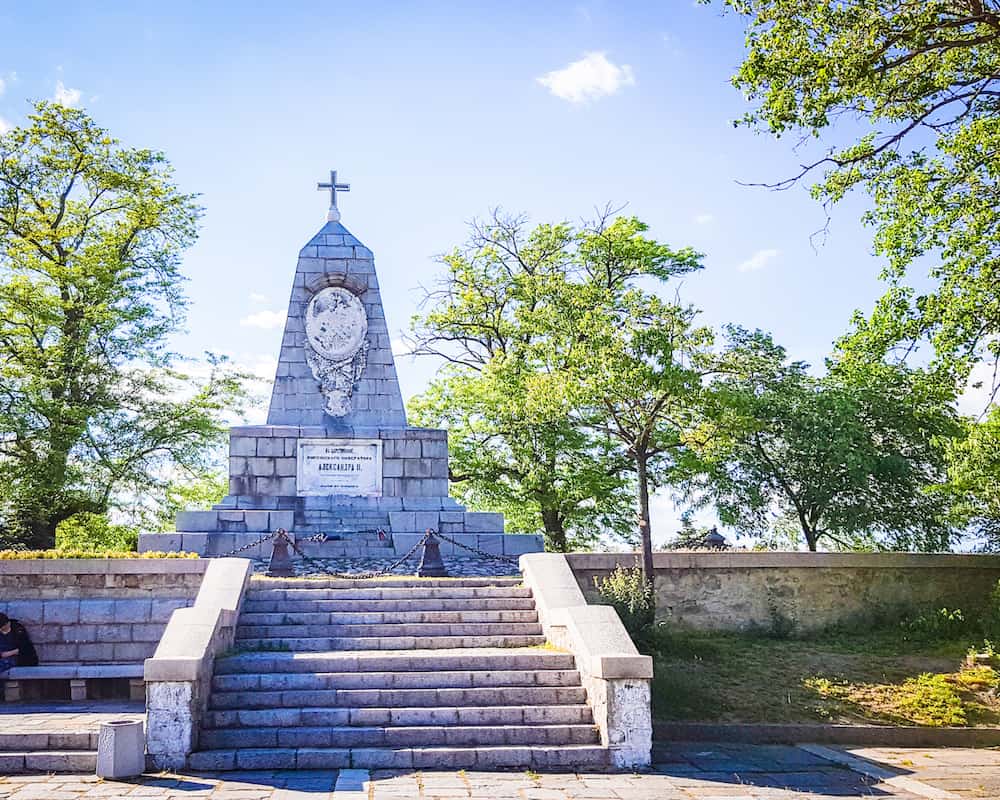 While seeing the Alyosha Monument up close is the major draw here, it’s actually not the only memorial at the top of the hill. There’s also a small military park with a fountain an a monument to Tsar Alexander I.

If you have extra time, you can bring your own picnic and eat it in the military park or even at the monument itself. You’ll find families at the top, some with kites and drones. 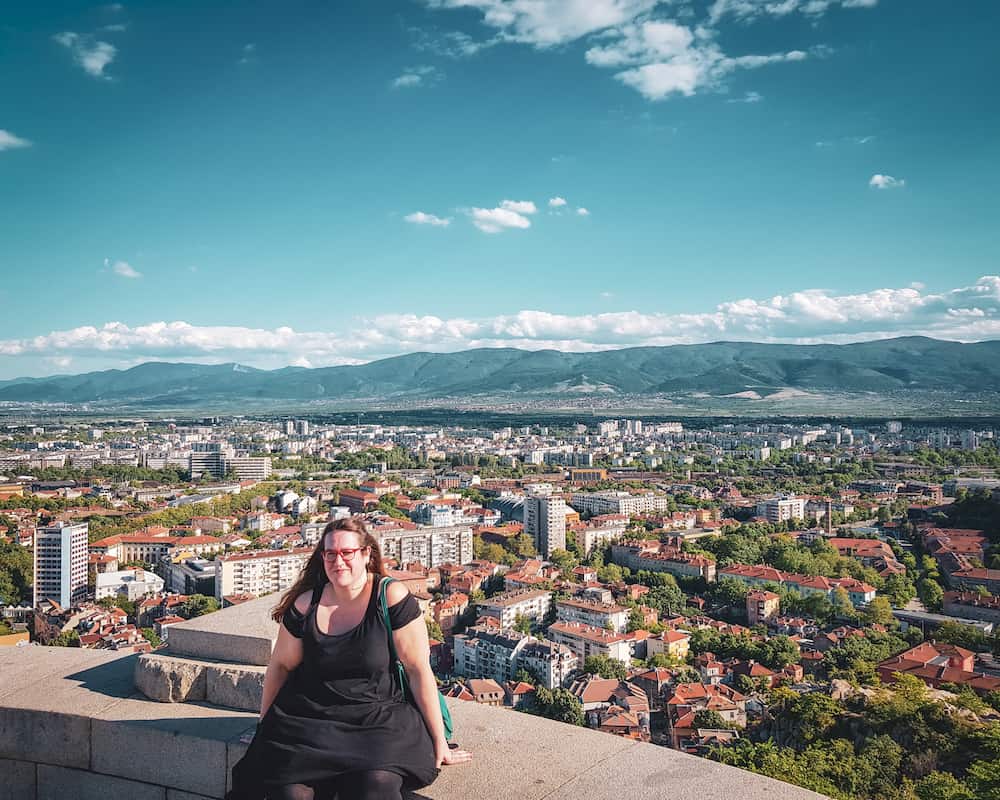 You also want to spend time appreciating the views from the top. You can see a three-hundred-and-sixty-degree view of the city. It’s just breathtaking! Definitely my favorite view in Plovdiv, which itself is an extremely photographable city. 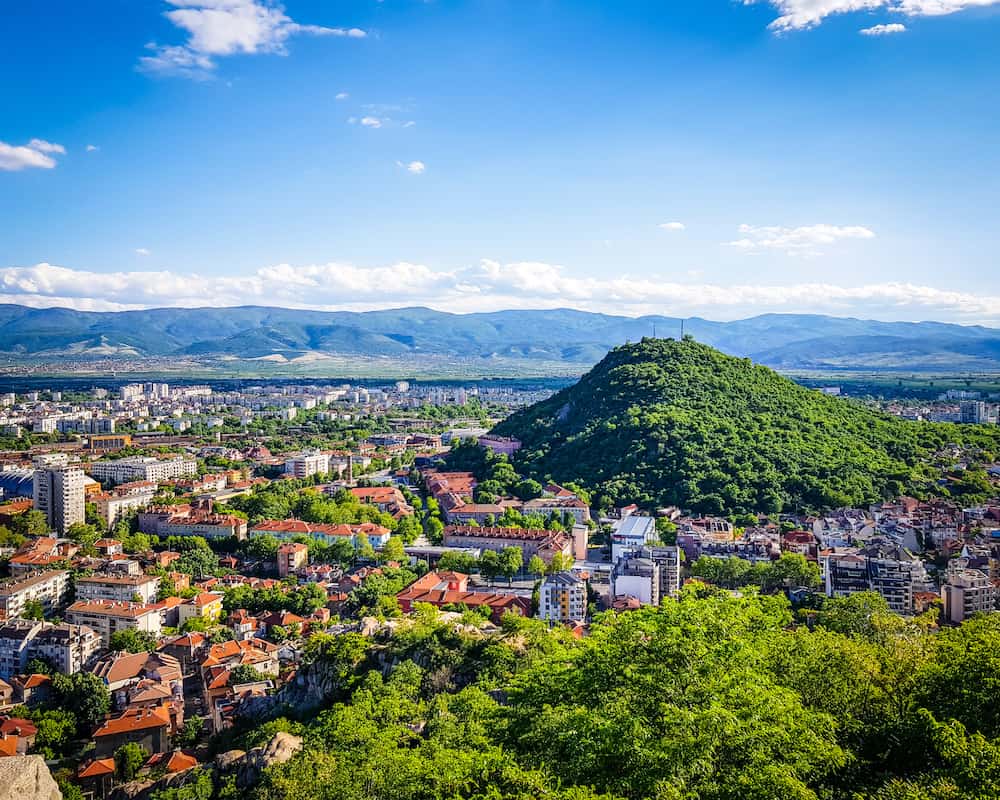 Here are some tips so your visit goes smoothly.

First, we enjoyed having Bulgarian sim cards so we could use data for Google maps to navigate as we went up. If you don’t have data in Bulgaria, then make sure to download the area of Google maps so it’s available when you’re offline. There is no wifi on the hill (though there used to be).

Second, it would be nice to bring up some water with you and a snack in case you get hungry. There aren’t any concessions at the top. There was a stand before, but it’s run down now.

The walk from the bottom of the hill to the top takes between thirty and forty minutes, depending on how many times you stop to admire (read: photograph) the view. The walk down is a bit quicker. Add in thirty minutes to enjoy the statue and views from the top, and you can it to take between ninety minutes and two hours to walk to the statue and back. 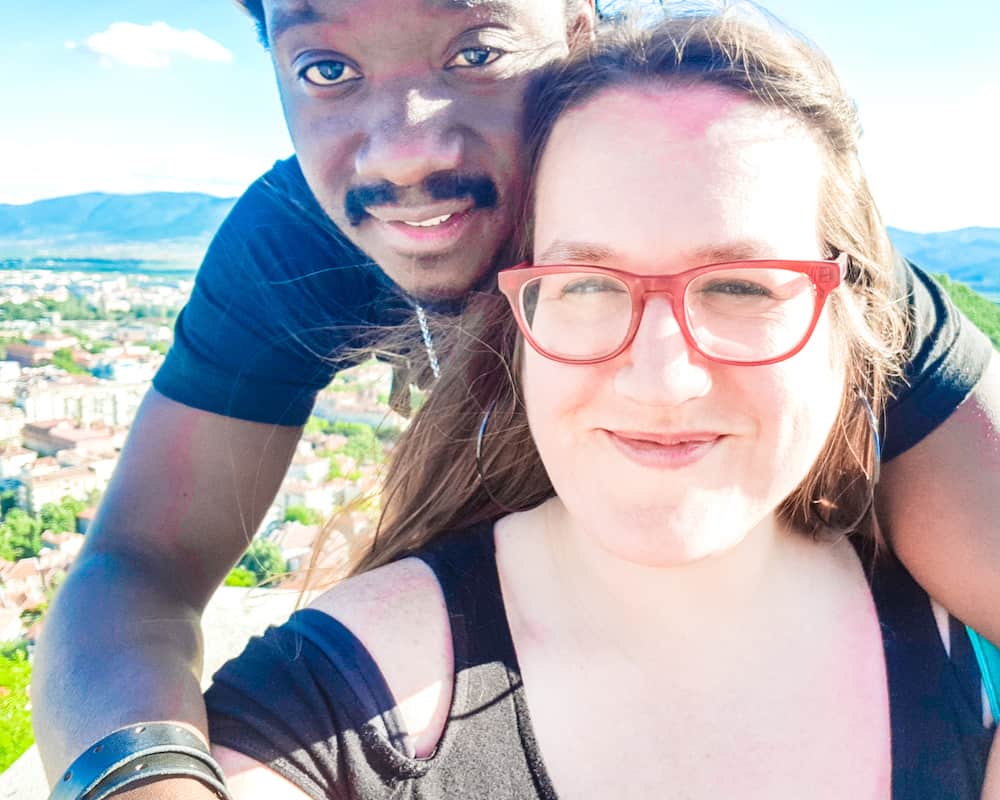 There are no bathrooms at the top…

Finally, it’s common for young people to watch the sunset from the top of the hill. If you decide to climb to the top to watch the sunset, make sure you think about what it will be like to climb down as it starts to get dark. It’s typically very safe, but you still want to employ common sense safety measures like having your phone charged so you can call a taxi to pick you up at the bottom.

See also
Romania or Bulgaria: Which Balkan Gem is Right for You?
Powered by Inline Related Posts 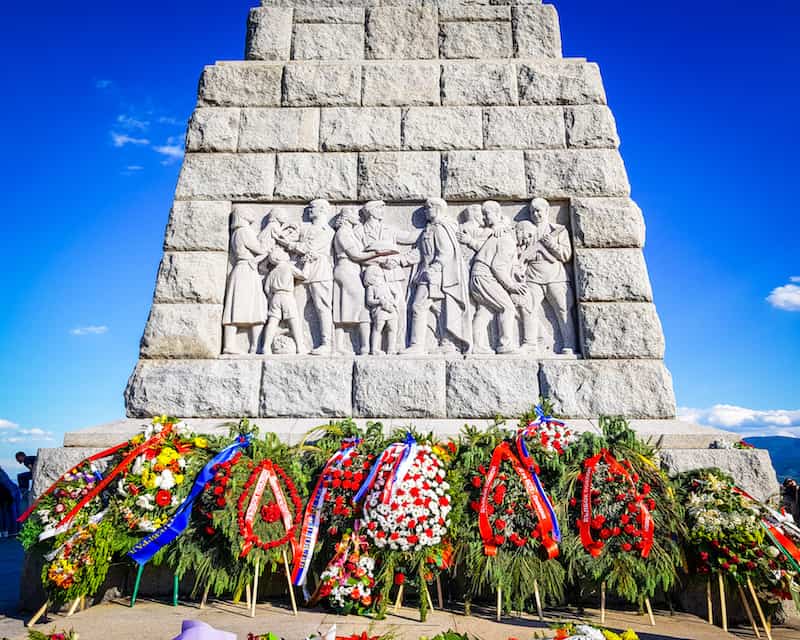 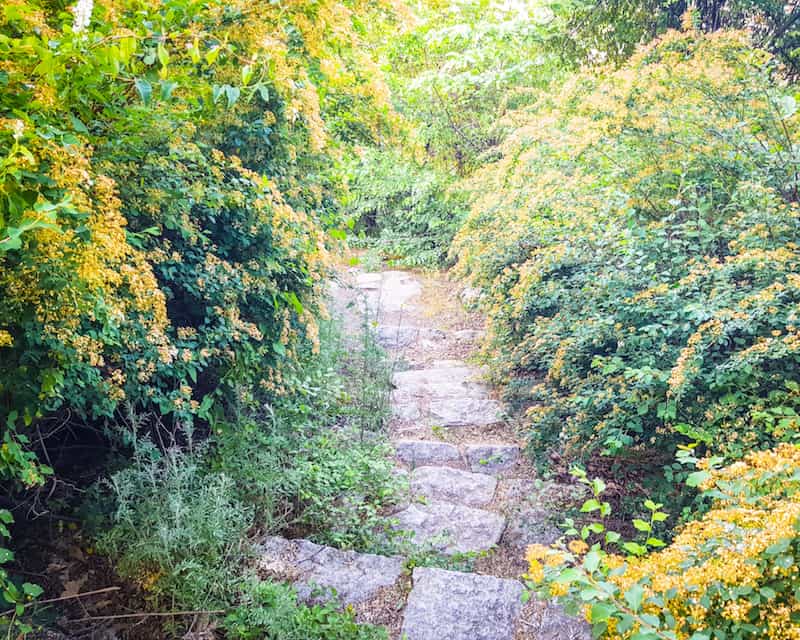 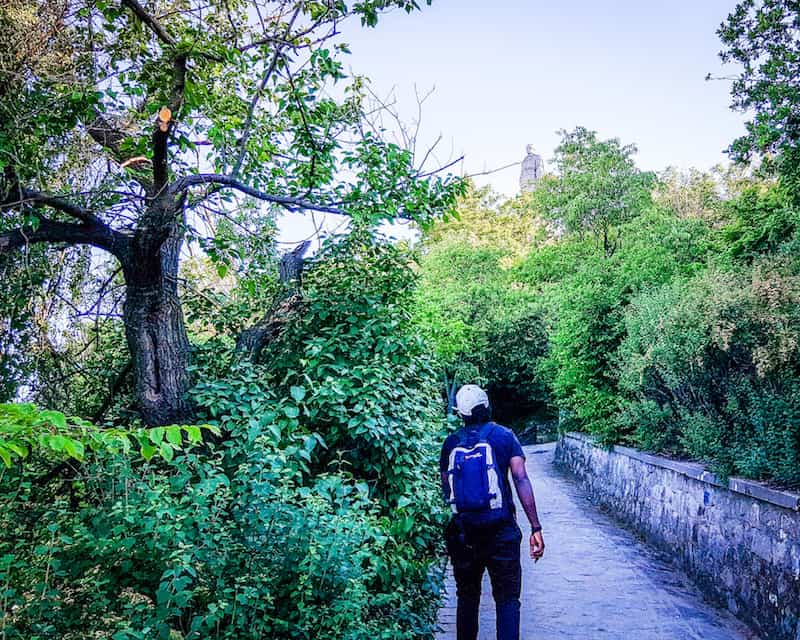 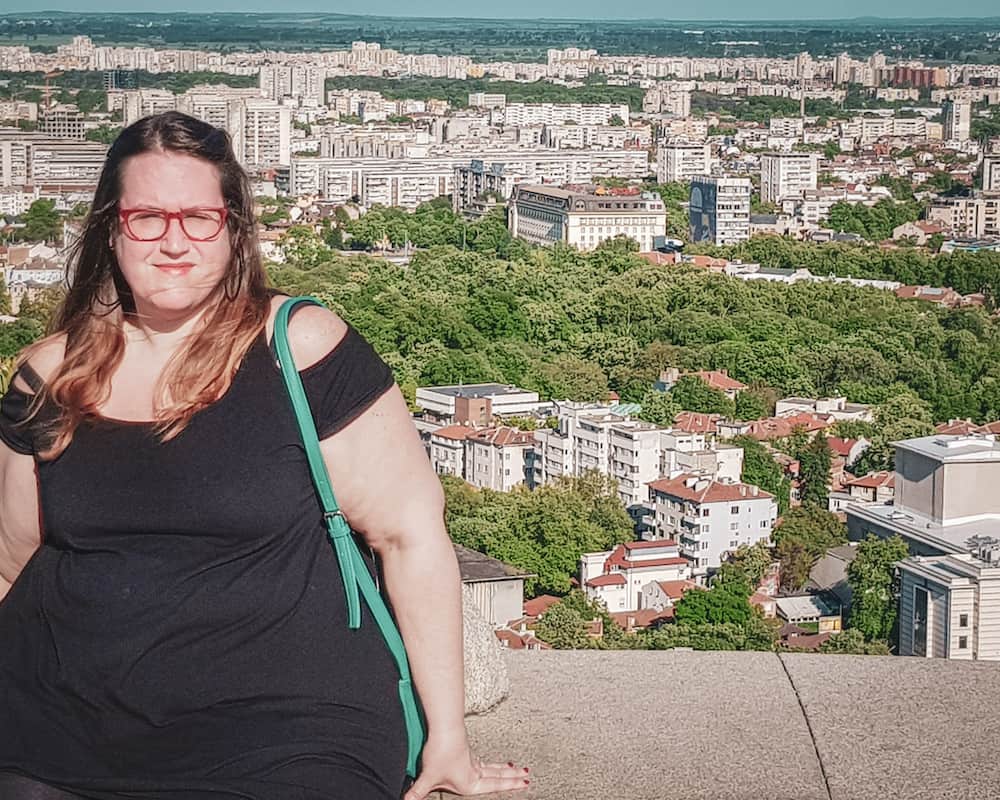 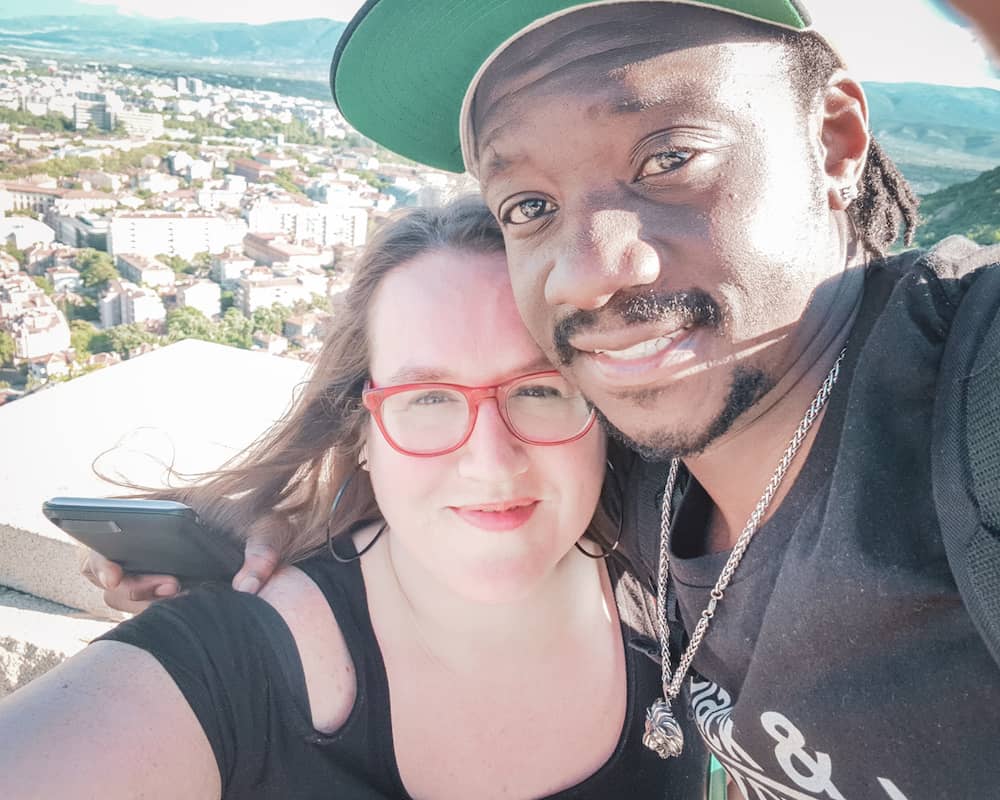 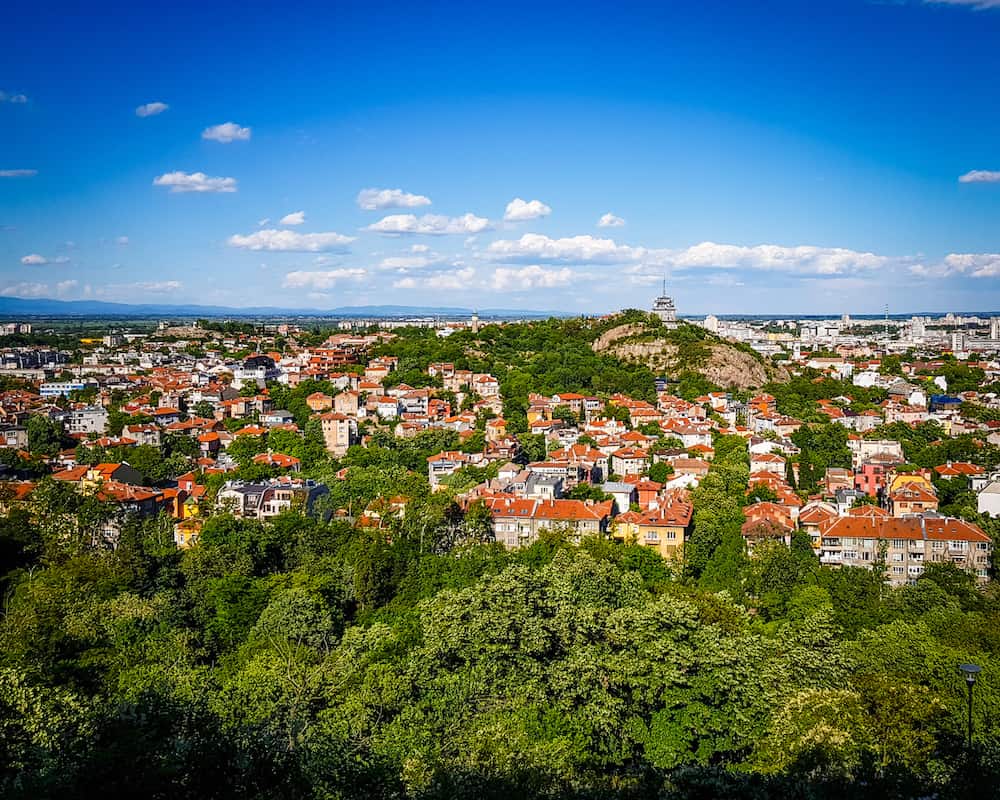 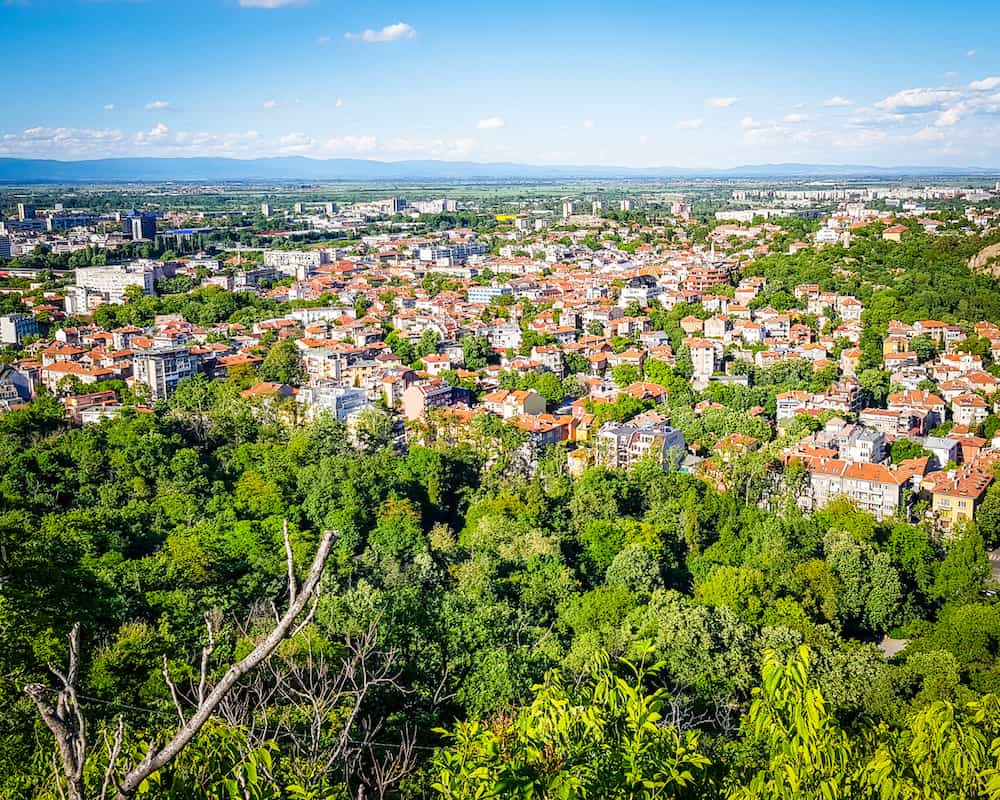 Where to Stay in Plovdiv 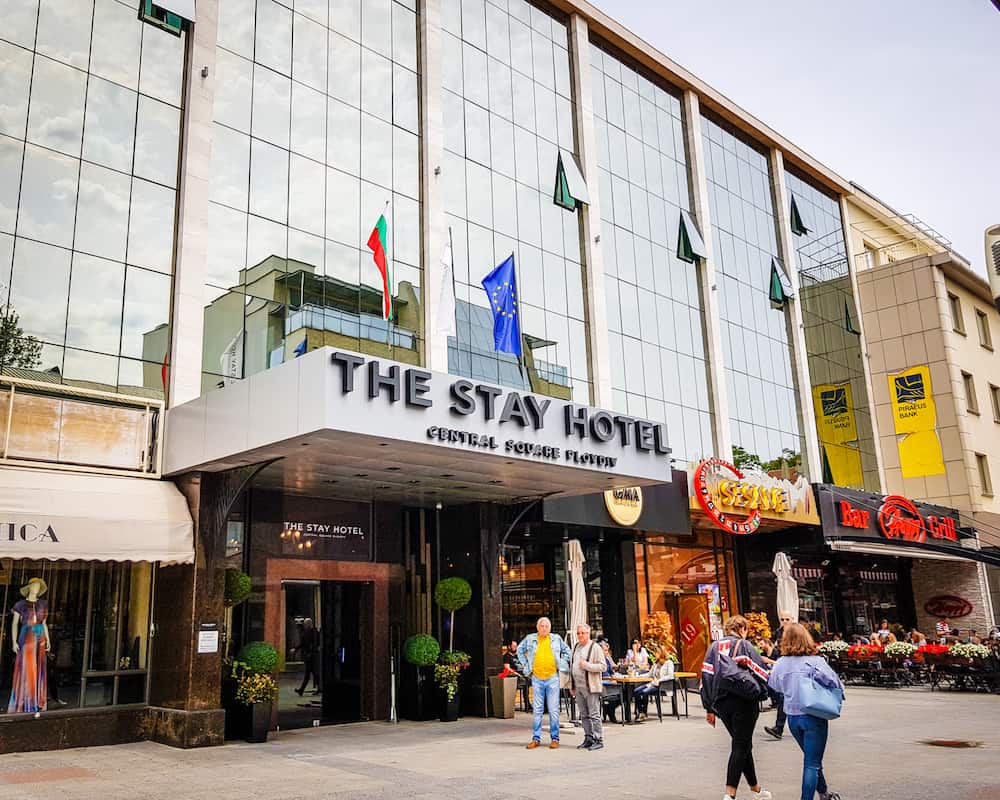 If you’re still not sure where to stay in Plovdiv, don’t worry – we’ve done the legwork for you! Here are our top picks for each budget category in Plovdiv.

Budget: When I stay at a hostel, there are a few things that I look for: privacy curtains, personal reading lights, and outlet space for each bed. Bonus points if the hotel lobby is modern and inviting – and if the kitchen is well-stocked and beautiful to cook in to boot, you might as well move in. Pijama Hostel has all of this and then some. Perks include board games, coffee and tea makers, and a central Kapana district location!

Mid-range: This is the hotel I chose for my most recent trip to Plovdiv, and I am obsessed with it! The Stay Hotel Plovdiv feels like a luxury hotel but at budget prices, and it’s located at what might be the single best spot in the city. The staff is friendly, the views are great, and the beds are comfortable. I’m seriously in love. My favorite part was that our room had a sleek couch that was a great place to relax after a long day of sightseeing and a long night out.

Luxury: The first five-star hotel in Plovdiv, if you’re seeking a spot of luxury in Europe’s 2019 Capital of Culture, you should check out the Residence City Garden. The rooms are refined and stylish – we’re talking spacious rooms and high ceilings (some rooms with chandeliers!), antique-style furnishings, and impeccable attention to detail. The bathrooms are beautiful and extremely modern, with lovely bathtubs that you can soak in to rest your feet after a long day of exploring Plovdiv. 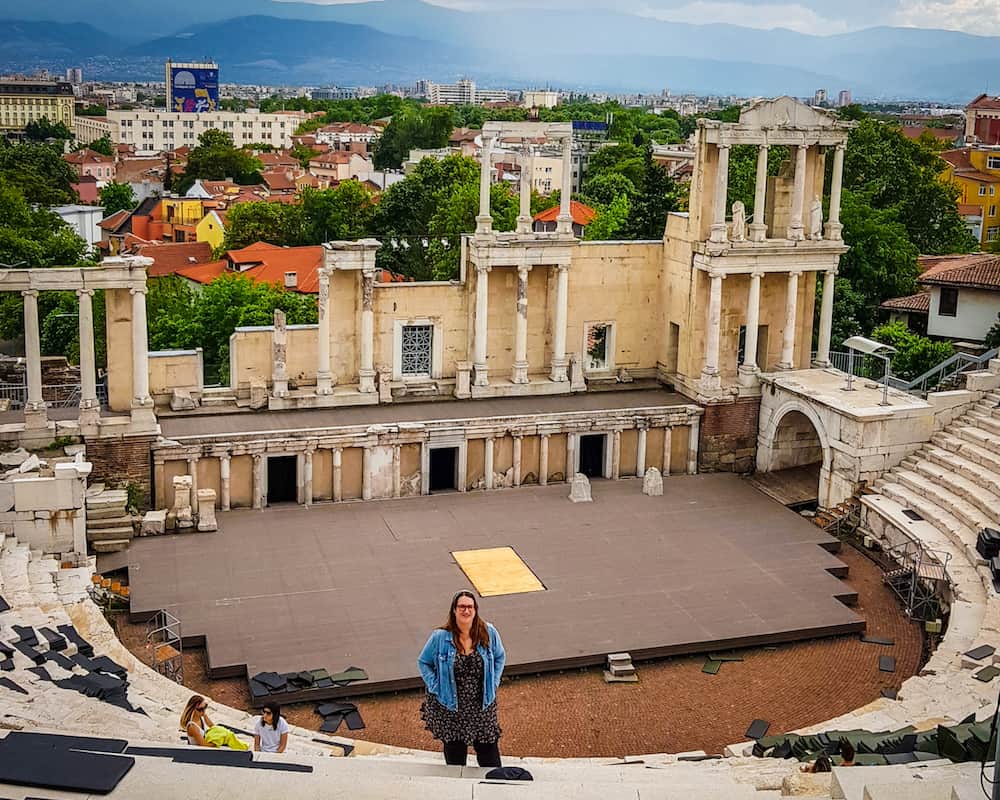 Headed to Plovdiv? If this will be your first time in the country, then start with our guide to planning a trip to Bulgaria.

Next, check out our guide to the best things to do in Plovdiv, our favorite Plovdiv Instagram spots, and our Plovdiv nightlife guide.

If you’ll also be visiting Sofia on your trip, we have guides on how to get from Sofia to Plovdiv and from Plovdiv to Sofia, plus recommendations for what to do in Sofia and the best Sofia nightlife and our favorite restaurants and bars.

You will also want to check out our overview of Balkan currency, which describes Bulgarian leva and how to tip in Bulgaria.

It’s always a good idea to travel to Bulgaria with a valid travel insurance policy. Travel here includes outdoor activities and travel to highly touristed sites. It’s great to be covered in case you have an accident or fall victim to theft. Travel insurance can help you recover your expenses and continue to enjoy your trip. 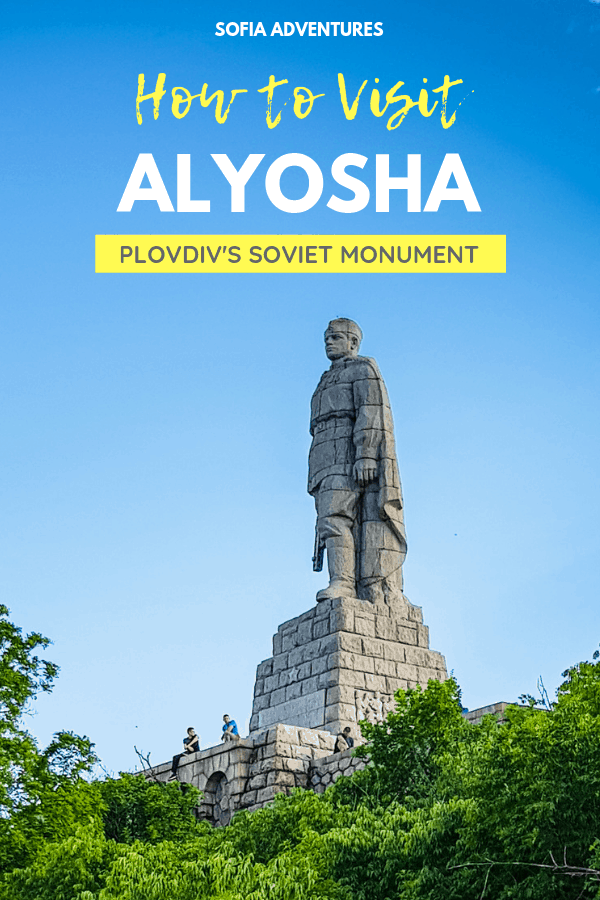